Artists Behind the scenes
Joys and Sorrows of Outdoor Concerts
by Janet Horvath September 24th, 2013 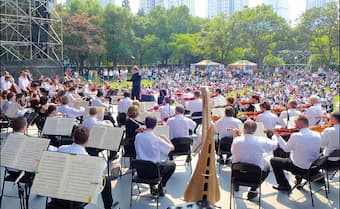 The audiences come to our outdoor performances in droves. They are excited to introduce the orchestra to their children where they can run around freely and dance to the music waving their little arms conducting as it were. I can remember the joys and sorrows of playing outside. Either it was extremely hot with humidity that caused the fingerboard of one of our cellos to melt off, or so cold that we were reduced to wearing mittens with the fingertips cut off! We would often set up right on the grass with barely a shell behind us, exposed to the sun, rain and wind. We had long clothespins to hold the music down and I was the lunger — I’d unclip the page and whip it over while my stand-partner continued playing. Then he would leap up to clip the newly turned page on the left side of the stand — teamwork to say the least. We were ok as long as the stands didn’t blow over as well! Our survival kit had to include the clothespins, sunglasses, cloths to protect our instruments from direct sun, bug spray, seat cushions for the hard folding chairs, a white jacket if it was cold which one could whip off if it was hot, sunscreen, and water bottles.

One summer black and green thick clouds rolled in and sure enough torrential rains engulfed us. With only one canvas bass case among the 10 players, the bass players took turns rushing each bass to the wooden trunks, which were several feet away behind the meager shell.

Another summer when I was principal cello I performed the famous cello solo in Poet and Peasant Overture, by Franz von Suppé, which I thought I did famously even on my “outdoor” cello. Evidently, a bird thought otherwise and dropped one on my cello. Editorial comment no doubt.


No concert was complete without Tchaikovsky’s 1812 Overture, and since it was outdoors we used real cannons. One year we played sitting on hay bales in an open field. Everyone was happy but the cows. They were terrified by the noise.

We and many other orchestras always finish with the encore The Stars and Stripes Forever, the famous march of America’s “March King” John Philip Sousa, which always gets the audience clapping in rhythm. 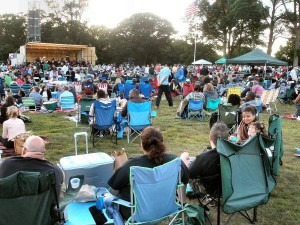 As a child Sousa attended band rehearsals with his father. His heartfelt ambition was to play with the local circus band but his parents disapproved so vigorously that he became an apprentice musician with the Marine Band. At the tender age of twenty-six he became the Band’s director. During his tenure Sousa expanded the Band’s repertoire with not only the work of Tchaikovsky, Verdi, Wagner and others — Europe’s then contemporary composers — but his own compositions such as President Garfield’s Inauguration March, Semper Fidelis, and The Washington Post. Sousa was extremely popular so much so that he left the Marine Band to start his own band in 1892. 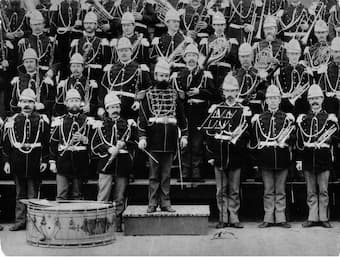 While on vacation in Europe four years later, Sousa received word that his band manager, David Blakely, a good friend, had died. Sousa immediately sailed back to the States. The music of The Stars and Stripes Forever began to come to him. Sousa wrote: ” …absorbed in thoughts of my manager’s death and the many duties and decisions which awaited me in New York, suddenly, I began to sense a rhythmic beat of a band playing within my brain. Throughout the whole tense voyage, that imaginary band continued to unfold the same themes, echoing and re-echoing the most distant melody. I did not transfer a note of that music to paper while I was on the steamer, but when we reached shore, I set down the measures that my brain-band had been playing for me, and not a note of it has ever changed.” Sousa’s Band played the march at almost every concert it held after that. Interestingly, Sousa set words to it, but it is rarely performed that way. 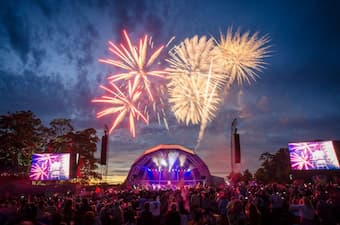 © The Bow and Baton

Usually our outdoor concerts were scheduled to coincide with late summer sunsets for the fireworks displays. The stage managers erected great big tall lights so we could see our music. Sure enough, as soon as it became dark, out came the insects. We could see them swarming around the lights and descending on us juicy unsuspecting victims. We couldn’t stop playing to swat a mosquito that had landed on us in the middle of Tchaikovsky! Sometimes we would have the opportunity in a bar or two of rest to hit a couple of them with our bows while they crawled on our music. One year a child came running up to the stage to spray bug repellant on our exposed ankles while we continued our playing and flailing.

Despite years of promises from the sponsors, as soon as the fireworks trigger person heard The Stars and Stripes Forever he invariably launched the fireworks, usually right behind the orchestra shell. We hurried frantically to pack up our instruments while cinders landed on us. The noise of course was deafening both from the booms and the ooohs and aahhhs of the crowds.

Some festivals have fancy facilities like Tanglewood in Massachusetts, home of the Boston Symphony, where there is a permanent stage and benches for seating the audience. The orchestra has air conditioning blowing up from the floor and a roof over their heads, good chairs and lighting, and a backstage. Audiences can purchase picnic baskets filled with everything one would want for dinner including wine! Santa Fe Opera is a state-of-the-art outdoor facility too as is the Aspen Festival. In Europe there are many festivals some with indoor facilities. The famous Verbier Festival’s main hall The Salle des Combins seats 1700. Each row is on a separate tier, which guarantees and excellent view of the stage. Improvements to the soundproofing and heat insulation make this a very high quality non-permanent venue. Others include Flanderies Musicales de Reims, and Granada International Festival of Music and Dance and many others (you can check on the festivals section for more information.)

Next summer we look forward to the throngs who love hearing the orchestra outside and in!