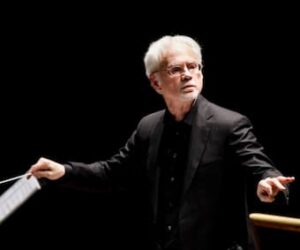 Celebrating his 75th birthday in 2022, American composer John Adams is considered one of the most frequently performed living composers of concert music. Primarily known for his operatic works on contemporary subjects, Adams placed Richard Nixon into the spotlight in his 1986 opera Nixon in China, and The Death of Klinghoffer, dealing with the Arab-Israeli conflict, brought new music into mainstream consciousness and discussion. Adams’ music is both radical and conservative, as “he carves away at the rock face between high art and the vernacular.” His musical language developed from the minimalist tradition of Steve Reich and Philip Glass, but as it has been suggested that Adams “tends to more readily engage in the immense orchestral textures and climaxes of late Romanticism.” 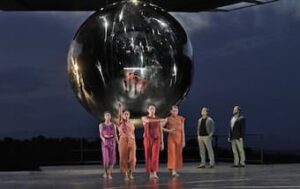 Adams is one of America’s most important contemporary voices as he continues to address major themes of American culture. The opera Doctor Atomic is based on the designer of the U.S. atomic bomb, and A Flowering Tree merges Mozart’s Magic Flute with themes from a southern Indian folktale. Adams won a Pulitzer Prize for On the Transmigration of Souls, a piece for orchestra and chorus commemorating the victims of the September 11 attacks. In addition he has received various awards, including five Grammy Awards, France’s Ordre des Arts et des Lettres, and six honorary doctorates. 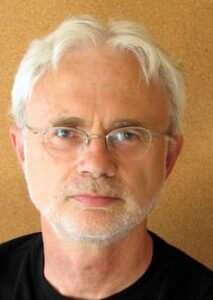 Born in Worcester, Massachusetts, in 1947, Adams was raised in Vermont and New Hampshire, and at the age ten he began to study clarinet, theory and composition. He had his first piece performed by a community orchestra at the age of fourteen, and subsequently attended Harvard University. He studied compositions with Leon Kirchner, David Del Tredici, and Roger Sessions, and after receiving his degree in 1971, Adams moved to California to head the composition department of the San Francisco Conservatory. Getting involved with the Bay Area’s thriving new music scene. Adams forged associations with local composers and musicians, including the minimalist pioneer Steve Reich. In collaboration with music director Edo de Waart, Adams became the new music advisor, and subsequently composer-in-residence, at the San Francisco Symphony Orchestra. He founded the “New and Unusual Music” series, “introducing major American and European avant-garde composers to San Francisco audiences.” 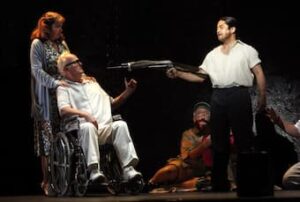 The Death of Klinghoffer

Trying to find his compositional voice, Adams consciously rejected both the European postwar aesthetic and the American academic avant-garde of the time. Integrating aspects of popular American culture into his work, his musical language “was most heavily influenced by the stripped-down harmonic palette and motoric pulse of minimalism.” Critics have suggested that “among those composers who have been categorized as minimalists, Adams is by far the most anchored in Western classical tradition. Roving tonal centers, fluid tempos and complex formal schemes make his brand of minimalism distinct from that of composer like Reich or Glass.” Adams’s rhythmic vigor and his sense of large-scale architecture emerged most forcefully in his Harmonielehre of 1985, a work “inspired by dreams, Jungian analysis, mystical poetry and transcendentalist writing.” However, Adams also draws on American vernacular music, trying to dissolve the boundaries between high and low art “by drawing freely on the vast and fertile American tradition.” Adams freely admits to having a musical split personality that alternates between two stylistic polarities, “the irreverent, almost confrontational, and the more sober, introspective.” 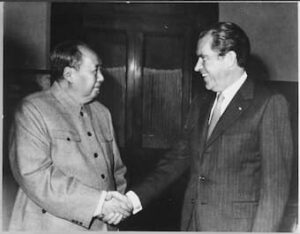 A good many commentator consider Adams’ operas his most important contributions to musical literature. He seemed to have a natural gift for setting the intrinsic rhythms of poetry. His subjects come straight from the headlines of American history, and he collaborated with director Peter Sellars on an opera canvassing Richard Nixon’s six-day visit to China to meet Mao Zedong. Nixon in China premiered at the Houston Grand Opera in 1987, and received over 70 performances in the following years. A second opera on a contemporary event addressed the hijacking of the Italian cruise liner “Achille Lauro” by a small group of Palestinian terrorist. The Death of Klinghoffer premiered during the Gulf War, and political sensitivity about the subject has canceled all performances in the United States after 1992. 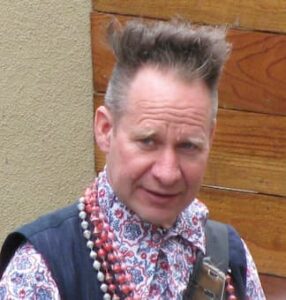 The cataclysmic Northridge earthquake that struck Los Angeles on 17 January 1994 inspired I was Looking at the Ceiling and Then I Saw the Sky. In a highly faceted collage of musical modes, Adams incorporates styles ranging from opera to oratorio, from Tin Pan and Schubert, from Alleys to rock, from soul, and from gospel and R&B. The story is told in “25 pop songs to urban poetry accompanied by an eight-piece rock band, and it is both a love comedy and a social satire on the lives of seven young Americans of varied ethnicities.” Adams has continued to be highly productive in the new millennium by continuing to compose music that addressing major national and international events in a variety of multimedia contexts. In recent works, Adams has explored highly virtuoso writing for specific ensembles, and he keeps on pushing the boundaries. As a critic pointed commented, “Adams is one of those contemporary voices we all need to hear and keep hearing.”

John Adams: I Was Looking at the Ceiling and Then I Saw the Sky, (Excerpt)