“My music exists to give pleasure” 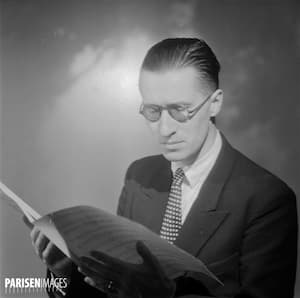 The son of the former director of the Conservatory of Le Mans, Jean Françaix (1912-1997) was a prodigious musical talent. He received his early musical instructions from his father and composed his first piano piece titled Pour Jacqueline at age ten. Dedicated to his cousin, his parents sent the piece to Editions Sénart, and the editor Marcelle de Manziarly immediately recognized the boy’s talents and presented the work to Nadia Boulanger, who taught the boy harmony and counterpoint. In a brief biographical sketch Françaix would later write, “My composition teacher Nadia Boulanger never managed to teach me harmony or counterpoint, let alone fugue. To save her reputation, she used to tell everyone I had mastered all these things at an instinctive level. But if the truth be known, elegant theories are the last things on my mind when I compose.” At any rate, Maurice Ravel was mightily impressed, and wrote to Jean’s father, “Among the child’s gifts I observe above all the most fruitful an artist can possess, that of curiosity: you must not stifle these precious gifts now or ever, or risk letting this young sensibility wither.” 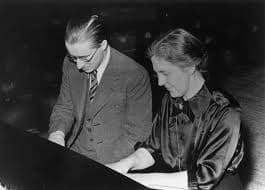 His first compositions sounded at the salon of the Princesse de Polignac, and such were his talents that he received the first prize in the piano class of famed pianist Isidore Philipp. “He was the regular accompanist of numerous interpreters, especially the cellist Maurice Gendron, and undertook many tours with Gendron and with the Trio Pasquier.” A scholar writes, “Françaix was a prolific composer, who seems to have possessed a constant disposition to create. His output was rich and diverse, and amounted to more than 200 pieces.” Since Françaix composed in an accessible and attractive style, a good many commentators dismissed his compositions as frivolous. Françaix replied, “My dodecaphonic friends will tell you I am an extinct volcano, and I would be reluctant to take issue with them. The only seal of approval I have is a qualification from the Paris Conservatoire; I have a few ribbons on my chest, as do many others in France.” 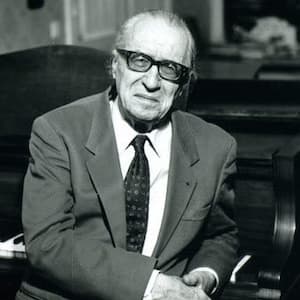 Françaix scored an early success in 1932, when his Eight Bagatelles sounded at the ISCM Festival in Vienna. An early symphony caused a scandal, but the Concertino for piano was received with enthusiasm. A critic wrote, “After so much problematic or labored music, this Concertino was like fresh water, rushing from a spring with the gracious spontaneity of all that is natural.” His operas and ballets ooze with irony and satire, very much in the tradition of Les Six. For his literary subjects, Françaix harvested some of the best-known works in French literature for his librettos. He had a decidedly hostile attitude towards contemporary music, writing “I wish I were Le Sage’s limping devil… so that I could go round lifting the roofs of people’s houses where they are listening to some of these broadcasts of contemporary music. I would like to bet that, after ten minutes, there are only four or five people still listening—these being, the composer and the more dedicated members of his family. Real contemporary music will only triumph when it is no longer modern, in other words, in fifty years’ time, when it is no longer attached to a series of “schools” and “isms.” 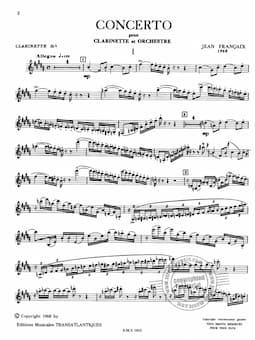 By all accounts, Françaix was an excellent orchestrator, “who made many arrangements and transcriptions of his own works.” In addition, he adapted works by Chabrier, Chopin, Mozart, Poulenc and Schubert, composers for whom he held a special affection. His melodic themes are constructed from simple motifs, and “incessant jocular dialogues frequently break out among instrumental parts in his works and agreeably turn the musical discourse into something very like an animated conversation in the form of brief phrases sprinkled with emphases and effects, different characters and great rhythmic variety.” Representatively, Françaix himself describes his clarinet concerto, “I hope that this concerto will amuse listeners. To play it is another matter. It is like an acoustical aerobatics show, with loops, spins and quite frightening dives for the soloist, who must be free of dizziness and have thousands of flight hours under his belt. He is spared nothing – even in the slow movement with its long phrases, which is enchanting but equally terrifying. To stay within the flying metaphor—a little like a plane gliding, always just short of falling out of the sky. Finally, the pilot starts up his roaring engines again, as carefree as if he were exchanging his uniform cap for the wild wig of a clown …” Jean Françaix died in Paris on 25 September 1997, at the age of 85.