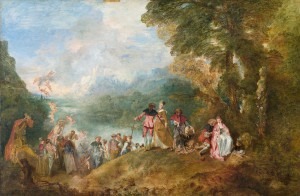 Watteau, in many ways, was a painter of rococo love. His pink and frothy paintings overflow with courting couples and cupids galore. His 1717 painting, L’Embarquement pour Cythère (The Embarkation for Cythera) is such a work, with cupids circling in the sky, cupids pushing couples together, couples snuggling everywhere, and on the background a glorious view of water and hills, surmounted by fluffy clouds.

Jean-Antoine Watteau (1684 –1721), who died when he was only 36, pushed the French Baroque into the French Rococo. He broke the formal and severe style of the Baroque by painting attractive scenes that were more naturalistic, while at the same time wildly imaginative. Watteau’s invention of the fêtes galantes genre, which showed charming bucolic scenes with a hint of theatricality, can be seen in L’Embarquement pour Cythère. This was his first picture for the Academy des Beaux Arts and shows a group of lovers departing (rather than arriving as the title implies) from the island of Cythera. Cythera was the birthplace of Venus and the lovers departing from her island is taken as emblematic of the transience of love. The lovers leave Venus’ island, paired up, with one woman glancing back fondly at Venus’ grove. Watteau painted another version in 1719, making elements such as the statue of Venus on the right side of the painting more obvious, with yet more active cupids. A boat now figures in the background. 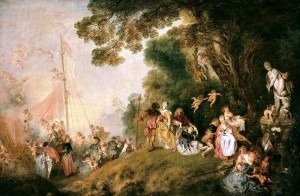 The French composer Claude Debussy (1862–1918), known for his mastery in making French Impressionism into music, captures Watteau’s pastoral artificiality with his own version of the fêtes galantes in L’isle joyeuse. In the original piano version, the sound seems to give us the idea that the performer is one of the characters in the painting – at first seeming superficial, but then conveying a deeper sensibility. Each listener can make the character himself or herself. There’s dancing, there’s a pause for thought, there’s the joy in being on the Isle of Love.

Debussy: L’isle joyeuse (Paul Crossley, piano)
Written first as a work for piano, L’isle joyeuse was later orchestrated with Debussy’s permission by Bernardino Molinari, an Italian conductor. As an orchestral work, it sounds much more sinuous and sensuous than the piano original – the listener is no longer a character but sees everyone. The woodwinds chatter and slither, the brass add cheerful top notes, the harp contributes a brittle sound, and a sheen seems to have been dropped over the entire picture.

Debussy: L’isle joyeuse (Lyon National Orchetra; Jun Markl, cond.)
Although Debussy claimed that L’isle joyeuse was pure imagination (he also claimed he didn’t write impressionist music), the connection between the art and the music, particularly in its capture of Watteau’s blend of happiness and poignancy, is a perfect pairing of love on a summer’s day.