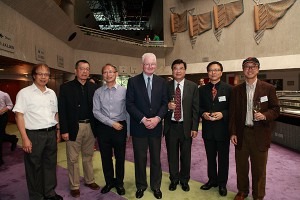 Two years on, the question remains: what, exactly, is Hong Kong’s University of Science and Technology doing dropping gobs of money to invite top-class musicians from around the world to spend two weeks on a campus without a music department? And its corollary: what are some of the world’s top musicians doing there?

In a series of concerts, open rehearsals, and panels this and last month, Hong Kong audiences got a chance to find out. The answer to both questions appears to be: quite a lot, and more with each passing year.

Covering the “Intimacy of Creativity” program’s inaugural year for the Wall Street Journal in 2011, your correspondent highlighted Hong Kong’s advantages for staging a performing-arts event, and noted the major logistical and resource support needed to open up sustained and unimpeded creative space for live music. But I failed to note a possible pitfall of “Intimacy” – that it would join the list of Hong Kong cultural events known for shipping in international talents and shipping them out after a quick turn onstage, without any appreciable impact on or engagement with Hong Kong’s own cultural foundations.

Visits to HKUST’s campus, and attending both concerts where the music of “Intimacy”’s up-and-coming Composer Fellows was profiled, allayed these concerns. Slotted under HKUST’s Humanities Department, “Intimacy” has enjoyed strong institutional support, holding discussions and open rehearsals for undergraduates on campus. Considering some of these events were mandatory, distracted smartphone usage was far less evident than one might have expected; students asked questions and had an opportunity that is rare for artists, let alone engineers: observing elite musicians’ creative process up close, with all the false starts and competing visions that contribute to the final, polished performance in concert. 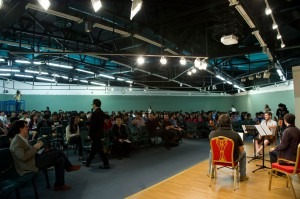 “Intimacy”’s six Composer Fellows, younger talents flown in to polish their pieces with established musicians, had their works profiled over two concerts that mixed in other contemporary music. American citizens predominated, but participants’ heritage and experiences stretching from Portugal to New Zealand to Bosnia to Beijing struck a suitably international balance. Considering Hong Kong’s anchor position for diasporas of nearby nations, one might have hoped for more than just Beijing native Dai Bo representing Asia; perhaps a future “Intimacy” year will tap the astounding musical diversity available within four hours’ flight of Chek Lap Kok Airport.

“Intimacy”’s composers rehearsed and workshopped their works with eminent musicians; one star turn this year was double-bassist Edgar Meyer, a master of genre-busting composition and improvisation. After the final performance, he was enthusiastic, if unwilling to name names: “I can think of many other musical programs that should include this aspect” of workshopping with performers, which is common in other performing arts like dance and drama, but rare in classical music.

Besides works by the Composer Fellows, “Intimacy” organizer Bright Sheng, and distinguished visitors like Meyer, the chamber ensembles also tackled Dvořák in their two weekly concerts. “In their own time, many earlier composers were also performers; they did both,” explained Sheng. Composer Matthew Tommasini, a Composer Fellow from “Intimacy”’s inaugural year who teaches music at HKUST and serves as Sheng’s deputy for “Intimacy,” elaborated: “in the final performance, we did perform the music as Dvořák wrote it. But in rehearsal, we also thought about where his music could be altered” to better fit a performer’s sensibility. A healthy approach in an art form that tends to put composers on pedestals rather than interact with them as the living, breathing human beings that they were.