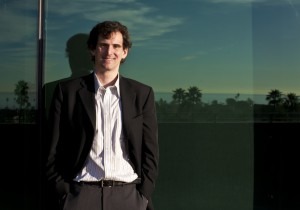 “It’s too long. We don’t need that many bars there,” he had said brazenly.

The composition was not new. It had been published and performed countless times before and no one has ever criticized it.

Bright looked at his own work for a moment, and had agreed without hesitation.

“Maybe you’re right,” he had said.

That is exactly the dynamic Matthew Tommasini, the associate artistic director of IC, sought to nurture at the annual musical event at the Hong Kong University of Science and Technology.

“We want the composers and the performers to have a dialogue about the compositions,” he said. “The final premiered composition is never the same as the piece that first went in.”

In its third season, IC is the brainchild of composer Bright Sheng, who founded the programme after sensing a growing divide between composers and performers in the music-making process. Misunderstanding was rife in modern music circles where most composers were no longer active performers and few performers ventured into composing. Creative collaboration however, was once a common practice – Beethoven had famously taken six months to deliberate the Eroica Symphony with his friends before its first public premiere in 1805 – and Matthew and Bright are keen to bring it back into present day.

Matthew was drawn by the project’s uniqueness and potential and moved to Hong Kong from New York in 2011 when he was presented with the opportunity to develop the programme with Bright, whom he has known since 2000. He has been at the helm ever since, overseeing the details of the project and watching, proudly, as the programme expanded and the number of students grew.

“144 young composers applied this year, which is a record for us,” he shared. The final six composer fellows will from 22 April to 28 April, receive daily feedback from musicians-in-residence and performers in open discussions, before premiering their final works in the World Premier Concerts on 28 April and 5 May.

“There will be tension,” Matthew said with a laugh when asked to comment on how hard it was to receive criticism on one’s own work. “Anybody in that position would feel pretty insecure but it is part of the process. We’re all in it together.”

Being a composer himself, Matthew understood very well that a shared creative process is not always easy to take initially.

“It makes the composition process less precious. A lot of composers feel like if they wrote it then they must be right, but professional composers generally cannot think that way all the time,” he said.

He admitted that at first they were not sure how far they should push things, resulting in changes that were more cosmetic than constructive in the first season. Last year, they really pushed the envelope, and while their honest criticism ruffled a few feathers, most of the composers came out with a changed attitude towards composition and looked back at the experience quite positively.

Matthew himself was one of the composers who made the greatest changes to their work last year. He wanted to paint an emotional landscape of Hong Kong using the marimba and violoncello in his piece mountains… seas… buildings… trees… but Bright and the other composer fellows were not entirely convinced with the original ending during the first open discussion.

He made slight changes to his work but it was not enough.

“During the second open discussion, I got the same suggestions again,” recalled Matthew.

It was not until he rewrote the entire ending, and had musicians Trey Lee and Ji Hye Jung put it together that the composition was complete.

“It is an eye-opening experience,” Matthew said. “You have to be open minded and open to criticism and realize it is part of the creative process and not personal.”

This year, instead of bringing his work to the critic’s panel, Matthew will focus on expanding the IC concept beyond HKUST, partnering with Hong Kong’s Metropolitan Youth Orchestra to allow their young musicians a chance to connect with music on a more intimate level.

“They will get to know a little more about how to work with a living composer, and through rehearsals, I might even decide to change some things,” said Matthew, adding that in the second week of IC, the MYO will perform his work Sonic Dreams Made Real in its Asia premiere. Renowned violinist Cho-Liang Lin will also make an appearance in that concert.

“I’m looking forward to hearing them play it, and letting them get to know me and the piece.”