Guest Posts
The Intimacy of Creativity Review
by Stephanie Ip May 27th, 2013 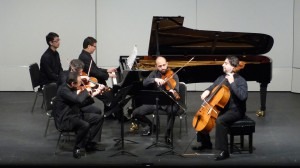 Spent two great afternoons at the City Hall enjoying two world premiere concerts following the third season of The Intimacy of Creativity, a two week intensive collaboration between emerging composers and world renowned artists. The two concerts, on April 28, 2013 and May 5, 2013, were given the “world premiere” title because the music played are revised versions of the composers’ original works, and have never been heard elsewhere before. For the people involved in the project and for HKUST’s music students, these changes might have been obvious and the experience a wholly enlightening one. For the mere concertgoer, dependent on how appreciative you are of contemporary music, the concerts might or might not have held an appeal because they are definitely not your standard repertoire.

Both nights I heard people wonder aloud why contemporary music has to be the way it is, riddled with complex tonalities, polyrhythms and unconventional melodic contours. Both nights I found myself enjoying the second half of the performance just that little bit more, breathing a tiny sigh of relief because it was Dvorak and something I understand. (Both the Piano Quintet No. 2 in A Major, Op. 81 on April 28 and String Quintet No. 2 in G Major, Op. 77 B. 49 on May 5 were superbly performed by the Quartetto di Cremona, Cho Liang Lin and Edgar Meyer.)

The first night’s concert opened with Roger Zare’s Geometries, a tranquil two-movement work that tries to imitate geometric ideas using musical lines, followed by Dai Bo’s Kong Gu You Lan, yet another atmospheric piece that uses many techniques to showcase complex counterpoints and harmonies. I have had the opportunity to listen to a recorded version of Geometries and loved the musical, almost orchestral quality of the piece, but live performances did not do the original compositions justice; both Zare and Dai’s composition left only fleeting impressions. Lin (violin), who accompanied Dai’s piano on the violin, was also unfortunately positioned, blocking most of the composer-pianist during the performance, although his skill and virtuoso are unrivaled. 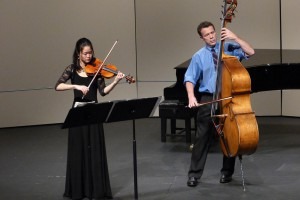 Karlo Margetic’s Svitac was an interesting piece that utilizes the clarinet to imitate the movement of a firefly. The piece was filled with microtonal trills and sweeping glissandi, rendering the piece a memorable one. Margetic performed his own piece of music on the clarinet, and while I had the feeling that the piece would have been improved if performed by a professional performer, I understood the programme organisers’ decision to have the composers play in their own pieces (where applicable), thereby emphasizing on the fact that composers could be performers too, and to ensure the spotlight remained on the composers as much as it did the performers.

Bright Sheng’s Three Fantasies was another delight of the night. Lin’s attachment to the piece is evident. He premiered the work in 2006 and Sheng had dedicated the work to him. His duet with Nolan Pearson on the piano was flawless, drawing out melodies that were both haunting and simple.

Personally, I enjoyed the second concert more than I did the first, not because the composers’ pieces weren’t great in the first one, but because the musical aesthetics of the second concert was much more varied and interesting. The night began with Steven Snowden’s The Devil’s Nine Questions, performed by Pearson and the Quartetto di Cremona, a wonderfully dynamic and visual piece about a young girl posing questions to the devil. Eli Marshall’s Duo: in cerca was another energetic piece, essentially a dialogue between the violin (Katie Hyun) and the viola (Simone Gramaglia) so intense that Gramaglia’s string broke at the climax of the piece and he had to stop the performance with a quick apology and rush off the stage to fix his instrument. It was a rather unfortunate incident, because the momentum lost at that moment never fully returned. Charles’ Halka’s Round and Round, inspired by a particular rhythmic pattern, was slightly more abstract than the first two pieces, but just as rhythmic and fast-paced. 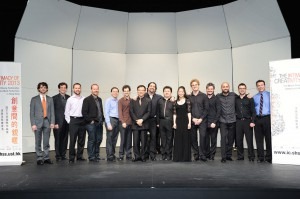 What I enjoyed most was Edgar Meyer’s appearance in the second half of the concert. Meyer, being not only one of the world’s most accomplished double bass players but also an excellent composer, performed his own composition titled Concert Duo for the double bass and the violin. The work was heavily influenced by folk music and the violin (Hyun) was played almost like a fiddle, with tunes and rhythms reminiscent of barn dances and rhythm and blues.

Both of the concerts were a joy to listen to. The first one was calmer, shriller perhaps, while the second concert felt much more playful. Perhaps it had to do with the fact that the second concert showcased the performers more prominently, where performance was really their forte and their energy shone through. Nevertheless, The Intimacy of Creativity ended on a successful note, and since founder Bright Sheng proclaimed that this season might be their best yet, I might be inclined to agree.