Blog
When the Detective goes to a Concert: Elliot Paul and Homer Evans
by Maureen Buja June 4th, 2015 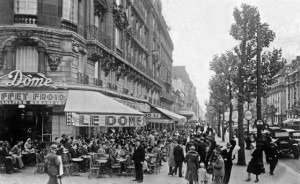 The American journalist and author Elliot Paul (1891-1958) was born in Massachusetts, served in France in WWI, and returned home to become a journalist and author. He returned to Paris in 1925 to become a writer and part of the fabled Jazz Age literary colony centered in Montparnasse. He was a friend of James Joyce and Gertrude Stein and was a great enthusiast of Stein’s writings. With the outbreak of WWII, he returned to the US and became a screenwriter in Hollywood. He was a talented pianist and frequently played at local clubs in Los Angeles. His mysteries with the American sleuth Homer Evans are remarkable for their use of musical references.

Homer Evans makes his first appearance in The Mysterious Mickey Finn (1939), Hugger-Mugger in the Louvre (1940), Mayhem in B-Flat (1940), all of which are set in Paris in the years between the wars. Later books in the series take him to the US. As you can tell from the titles, these are parodies of the detective novel as much as they are contributions to the genre. 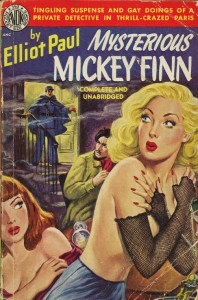 In The Mysterious Mickey Finn, Homer, going home after a night on the town, longs to be ‘lulled to sleep by Czerny. Good old Czerny and his school of velocity.” He had, for the past 2 years, hired a conservatory student to play finger exercises as background for him at home between the hours of eleven and one. In Mayhem in B-flat, we learn that he believes that the “Czerny School of Velocity was a form of aesthetic exercise that increased the listener’s powers of appreciation and lulled dangerous tendencies toward dynamic activity.” When he gets home, he finds that his student pianist, Miriam Leonard, has returned to Paris to tell him she has a problem and he realizes that “the girl’s two hours of Czerny, played too conscientiously, had mechanized her reactions. She might feel all the drama of Bach and the poetry of Chopin when reading a score silently, but once at the piano she would fall into the exact monotonous pattern of the finger exercises.” Her performing career is over. 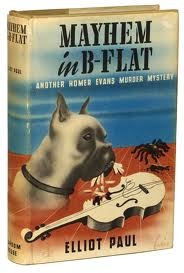 In Hugger-Mugger in the Louvre, Miriam has taken up the harpsichord and she and Evans are off to a “concert of ancient French music” at the Salle Gaveau. The first number was a Gavotte by Sartrou, described as “a little-known composer who had been a first horn player in the royal orchestra of François I.” Although there is a Sartrouville just outside Paris, there is no composer Sartrou, and Gavottes, dances coming from a folk music background, weren’t popular at the French court until Louis XIV. Another work on the evening’s program was Monteclaire’s Plaisirs champêtres. We may not have a work by that name by the non-existent Monteclaire, but there is one by Jean-Féry Rebel.

The story closes with an escape from a lunatic asylum, with the noise described as something of “Wagnerian proportions, with Stravinsky’s Sacre du Printemps thrown in.”

In the third book, Mayhem in B-Flat, there’s a stolen Guarneri violin, owned by Andrew Flood (aka Anton Diluvio), and a concert with an unbelievable programme: 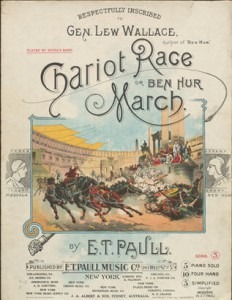 As Homer Evans notes, the first half of the program is for musicians and the second half is for those who pay.

Some of these are known works, others are delightful inventions. The composer Sauvequipeut’s name means “Every Man for Himself” but both Fauré and Grieg wrote Opus 13 Violin Sonatas. As many works as Vivaldi did write, a Variation on an Air by Monteverdi wasn’t one of them. Tienemiedo means “to be scared,” in Spanish. The French composer Philidor (1726 – 1795) wouldn’t have written a title as modern as “Elegie More or Less in C.” That sounds more like Satie.

For the second half of the concert, Ethelbert Nevin did write a piece called Narcissus, which is one of his best-loved pieces and is part of his Opus 13 Water Pieces. Star of the Sea is a translation of one of the names for the Virgin Mary, Stella Maris, but is not an old American song. Rachmaninov’s Prelude in C sharp minor doesn’t appear to exist in an arrangement for solo violin, and the last work, by E.T. Paull, is another piano work but is more famous for its cover than its contents.

Paull: Chariot Race, “Ben Hur March”
There are some wonderful asides, such as one about the critics and their grumblings about the concert: “The first part contained several little-known selections from the music of past age, which would necessitate the critics writing something out of their heads instead of looking what they had last said…. And the second half consisted principally of popular tunes which those blasé gentlemen could not contemplate without loathing.”

Elliot Paul knew enough of the musical world to pull its leg and, as musical readers, we can appreciate his humor.