Music does not speak of position or place. It can be heard as English, French or German and it might sound like it comes from the voice of other countries, but music is also a language unto itself, and it can speak to anyone anywhere. If there’s one thing that music does better than other art forms, it brings people together; it doesn’t separate them like spoken languages do.

Regardless of where you come from, or your education or your social standing, music does not exclude you from its voice. Any person from any background is able to hear any piece of music and think of it and feel what they will. Music excludes no one.

Community orchestras and choirs are groups that bring people together for a common cause. Not only do they teach you about performing music, but they also teach you about life and how other people see the world.

Having worked with several community orchestras, I’ve found that they are so welcoming and alive. It’s a joyous experience being involved. I’d encourage other composers to help out in community orchestras; it’s a smart way to kick off your music career.

Some community groups are so good that they get asked to be part of professional orchestras and choirs. Especially when it comes to the big music like Verdi’s Requiem or Mahler’s Symphony of a Thousand, and of course, Beethoven’s Ode to Joy from his 9th Symphony. 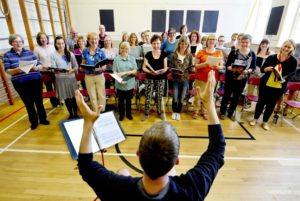 Community groups offer you a place in society and they include you with no questions asked. It’s the love of music that brings them together. But, it’s not just the groups that make you feel welcomed, it’s the type of music they play. I know community groups that tackle some of the hardest music to perform. Like Ravel’s Bolero. Here’s a flash mob from the Queensland Symphony Orchestra performing Ravel’s Bolero for their local community.

The music that most community orchestras and choirs tackle are usually well known classical pieces. In other words, inclusive music. The reason for this is they want people in the audience and in the group to feel at home with music they know. And, popular classical music is something most people will have experienced.

People who join community orchestras and choirs will usually have the love of music instilled in them. Or, they have been a player or singer and they might have let music slip over the years. Some do it for the sheer joy of performing music. The energy that comes from making live music can take years off your life. Some medical experts say that music has an anti-ageing power; it helps keep your brain young.

Being welcomed and included in things is one of life’s great experiences. Sometimes it’s easy to feel isolated in this world, and a community orchestra or a choir is a place that can help pull you out of your remote space.

The medical world knows full well the value of inclusive music. Many hospitals have music therapists on their staff. There’s an abundance of companies that can offer advice and guidance on how to set up an inclusive music program for your school or business. At some universities, you can even do a master of music therapy.

Localised small community groups like this one in Chennai in India, show how you can learn different styles of music and be involved in group music-making no matter what your level of experience. Give alcohol, drugs and cigarettes the flick, and join a community music group today.

And, if all this good news about being in a community music group is not enough for you, these groups can actually make you healthier, so what’s to lose? 1 in 6 Americans sings in a choir — and they’re healthier for it.