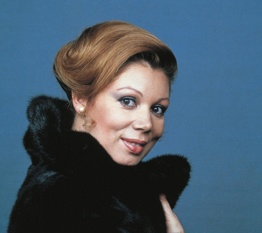 To fully experience the artistry of Italian soprano Mirella Freni, who died in February at age 84, one must only listen to her rendition of Mimi on Herbert von Karajan’s seminal recording of La Bohème from 1972. Freni’s voice is of arresting beauty, sublime richness, touching vulnerability and delicate warmth. She displays thrilling heights as well as filigree piani. No wonder the notoriously demanding von Karajan considered her the perfect Mimi.

This recording is noteworthy not just for its excellence but also because it features the perfect pairing of two childhood friends from Modena: Mirella Freni (born Fregni) and Luciano Pavarotti. If the stories are true, both shared the same wet-nurse, their mothers worked in the same cigarette factory, and both aspiring young singers studied with the same voice teacher.

While Pavarotti took his career from stage to the screen and eventually to large-scale (and miked) arenas, Freni stuck to what she was comfortable with: classic soprano roles for the medium heavy soprano.

Early on, she excelled in the light comedic roles like Adina (Elisir d’Amore) and Nanetta (Falstaff), imbuing the characters with her natural charm, easy stage presence and agile voice. Her breakthrough to the global stages came in 1960 at Glyndebourne, where she performed Zerlina in Mozart’s Don Giovanni in a cast that included Joan Sutherland.

But she gained global fame for her Mimi, which was also her debut role at the Metropolitan Opera in 1965. Equally admired were her Micaela (Carmen) and Desdemona (Otello). She was a less natural fit, nor as comfortable, in the heavier Verdi roles such as Leonora (Forza del Destino) or Aida. She consciously shied away from roles she felt unsuited for. “I have always been honest with myself and my possibilities,” she told Opera News magazine in 1987. She turned down the title role of Turandot, and only performed Butterfly in the recording studio.

A non-confrontational and cooperative colleague, she maintained a lifelong friendship with Pavarotti. Her second marriage was to Bulgarian bass Nicolai Ghiaurov, with whom she also recorded and co-founded a singing academy near Modena.

Freni’s irresistible artistry is beautifully captured in the 1991 live video recording of the Met’s Gala. As is customary at these Met celebrations, the stars of the day are lined up to perform a single aria. Backed by a stage audience of Thomas Hampson, Kathleen Battle, Sherrill Milnes, Samuel Ramey, Ferruccio Furlanetto and (an already 62-year-old) Hermann Prey, Freni is escorted to the front of the stage. Calmly, looking nearly shy, she delivers an absolutely flawless rendition of Adriana Lecouvreur’s Io sono l’umile ancella. Her voice drips with lushness, her breathing is impeccable, her heights spinetingling, her messa di voce awe-inspiring. The aria is also the perfect epithet for this sensational soprano: “I am the humble servant of the Spirit that creates.”