Artists Behind the scenes
In touch with Xu Min-qi :
The Spirit behind the Guangzhou Opera House
by Juliette March 10th, 2013 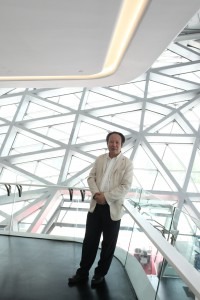 When I went to Guangzhou last September for the Asian premiere of Anthony Minghella’s Madama Butterfly, I was completely swept away by the Guangzhou Opera House. The stunning architecture of the building, designed by Zaha Hadid, together with the overall appearance, atmosphere, energy and enthusiasm of the audience, left a lasting impression on me and a certainty that this venue will become a local and international success.

Ever since then, I have been curious to discover more about the brains behind the Opera House, Artistic Director Mr. Xu Min-qi. He is a low-key, humble man who avoids the limelight, so it took several attempts before I was finally able to meet Mr. Xu and chat with him about the GOH and his vision for its future.

Now, Mr. Xu, the man with such insight and thoughtful planning, is sitting in front of me. A soft-spoken, well-mannered and elegant gentleman, Mr. Xu, a native of Tianjin, developed a passion for the arts, particularly music and painting, at a young age. After years of hardship and struggle, he enrolled at the Tianjin Conservatory to study Music and Arts, where he played the bassoon, keyboard and timpani, and studied composition. It was this determined attitude that ultimately saw him achieve the role of Artistic Director of the GOH.

The GOH, a multi-purpose complex, was inaugurated in May 2010. It was named in English with the aim of establishing the venue on the international circuit, presenting world-class operas, concerts and performances. The GOH staged only one opera per year in its first three years: a programme dedicated to Puccini’s Turandot in 2010 (which was very controversial due to the previous year’s performances in China), Tosca in 2011 and Madama Butterfly in 2012.

Thanks to the high quality of the three operas’ productions, and a determination to attract the best casts, the GOH has become known as an up-and-coming venue on the global opera scene, renowned for its perfect acoustics and the demanding standards set by the perfectionist Mr. Xu. Now that the GOH is on a surer footing after dealing with initial teething problems, two operas will be staged each year in collaboration with leading European opera houses, and the coming years will see top productions with world-renowned musicians under the spotlight. 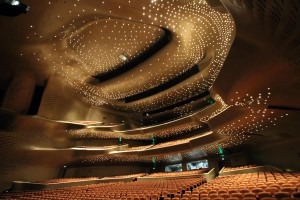 As well as musical programmes, the public also have access to a variety of other art forms inside the Opera House, including exhibitions of paintings, sculptures, and an extensive selection of arts education sessions about music, operas, Chinese operas ‒ the list goes on. Through attending these free lectures about arts and music, the audience can learn the history and background of the performance they are going to attend, and gain an understanding that not only makes the experience more enjoyable, but also prepares them for more sophisticated programmes in the future.

It is clear that if one wants to raise and maintain the standard of a leading opera house, educating the audience is as important as attracting the top productions.

Lately, the GOH has also become a leading player in the Guangzhou Arts Festival, working in close collaboration with local Asian arts festivals, such as the Hong Kong Arts Festival, to offer joint performances. This is another step on the path towards becoming a prominent opera house within Asia and, ultimately, a dominant presence on the international circuit.Mr. Xu’s passion and dedication to his work is admirable. He hasn’t lost sight of the fact that the success of the GOH is ultimately determined by audience satisfaction. Which is why, if you have the chance to go to the GOH, you may well come across Mr. Xu after the performance. He is the gentleman at the exit, trying to gauge the audience’s response by reading the expression on audiences’ faces, before asking them if their expectations of the evening have been met.

Mr. Xu is, of course, completely right in his belief that the success of any project is linked to the satisfaction of the end user. This is why his focus on making sure that audiences are happy will help this outstanding venue go from strength to strength.