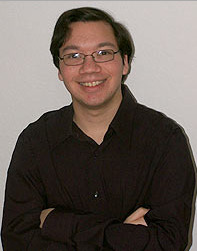 Not many composers can claim to have had their very first music composition publicly performed, but Roger Zare could. And judging from the number of awards and scholarships he has won since then, you might even assume he has perfected the formula for composing great music, but Roger disagrees.

Arriving in Hong Kong in mid-April for the Intimacy of Creativity, a project created to promote the long forgotten art of collaboration between artists and composers, Roger admits that the workshop will be a challenge in more ways than one.

Firstly, he only recently began to share the Intimacy of Creativity founder Bright Sheng’s view that music was not set in stone. Secondly, performing his own work at the world premiere concert at the end of April would be his first performance in the last two years.

A challenge? Yes, but Roger, who has a Doctorate in Musical Arts from the University of Michigan, was quick to add, “I’m really looking forward to being in Hong Kong and performing my piece.”

Born in Sarasota in Florida, Roger knew at the age of fourteen that he wanted to be a composer. He had shown his high school orchestra director a string orchestra piece he had written using short ideas he and a friend had developed using Notation Software. The orchestra director saw something in the young violinist’s work, and decided to put on a concert.

“I remember that first time I was able to sit in the audience… and hear this thing that I’ve created,” Roger recalled. “It was such a thrilling experience. I knew I wanted to be a composer from that day on.”

Roger’s dreams came true years later, when he gained extensive recognition for winning the New York Youth Symphony First Music competition for his work The Other Rainbow in 2005, and the ASCAP Foundation Rudolf Nissin Prize for Green Flash in 2009.

“I [try] to make the music sound bigger than the ensemble,” he said. “Using a larger variety of sounds and textures, I try to create something that is more than the sum of its parts.”

Apart from his love for the orchestra, Roger is also fascinated with science and nature. Many of his works are inspired from mathematical concepts and natural phenomenon, and written to convey his amazement at what the world has to offer.

In the case of Geometries, Roger’s two-movement chamber music work that would be featured at the Intimacy of Creativity, his inspiration was as simple as wanting to take basic mathematical concepts – fractals and tangents – and translate them into musical shapes.

“I just wanted to bounce musical lines against each other and see where that would go,” he said of the second movement, Tangents, which he composed first. “And then for Fractals… it’s about this one musical line that’s all over the place, developed in a multiplicative way… sort of like when you look at a fractal.”

Roger will play two roles in the Intimacy of Creativity, one of a composer fellow and another as a pianist, although he says he is no longer an active performer since graduating from the University of Southern California in 2007.

“I’ve been caught up with composing… and sort of fallen out of practice,” he said. To have the composers be a performer in their own pieces was Bright’s idea, according to Roger, who said Bright told him “it was important for [him] as a composer to also be a performer.”

And increasingly, as Roger practiced for the upcoming workshop, he sees the significance in Bright’s suggestion. Already, viewing his own work through the eyes of a performer, he finds himself making technical changes to his piece and noticing things about the music that even he would want to criticize.

Roger never used to revise his own work. Having learned how to compose music from the first bar to the final bar without looking back, he said that he has only recently accepted that “music is flexible” and “as alive as you’ll let it be alive.”

“I used to… write a piece, finish it, leave it, move on and write another piece. I don’t think about revising it,” said Roger. Although he still doesn’t revise that often, he states that he is “a lot more flexible in terms of being open to change things after the fact.”

“As part of the Intimacy of Creativity, it’s the thing that I’m most excited and nervous about.”