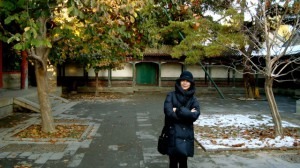 Behind every great man there stands a wise woman. Behind the late award-winning director Anthony Minghella, there stands his wife Carolyn Choa- together, they have shared their artistic career most fittingly. Carolyn has choreographed numerous dance productions before involving in Minghella’s widely heralded opera production Madame Butterfly with ENO.

Since when did you find dancing inseparable from your life? How did you decide to set your career in dancing?

I was sent to Carol Bateman’s School of Ballet at Helena May when I was five years old and fell in love with dance since I first stepped on stage as a grasshopper.
Years later, London Contemporary Dance Theatre visited Hull University when I was a drama student there, and the power and the beauty of the dancers were a total revelation. After graduation I auditioned for The Place in London and on the first day of term I knew I was home.

Designing the choreography of Madame Butterfly was an important checkpoint in your life. How did you decide to get involved in an opera production?

The music and the libretto are always the starting point. They have to stimulate your imagination. It is taken as read that one would always learn from every job, but equally important is whether or not there is anything one could contribute to a project. As a choreographer, of course the director is an important factor too. Their perspective has to draw your interest, because you are there to support their vision as well as to express yourself.

Why would Anthony and you choose Puccini’s Madame Butterfly as the first operatic project?

The project was actually proposed by ENO. But Anthony was Italian and I am from the Far East, so Puccini set in Japan seemed like a fun idea. The piece appealed because it has a very well-written libretto, and we were both attracted by the complexity of the characters. Not only is Ciocio-san a beautifully rounded role, but Sharpless, Pinkerton and Suzuki each offers rich dramatic possibilities. We didn’t know the music well at first but grew to love and admire it more and more. 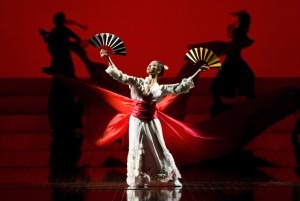 With its story centred around the Japanese Ciocio-san, Madame Butterfly unfolds traditional oriental elements before the western culture. As an artist born in Hong Kong yourself, how would you interpret the piece? How do you compare your concept with Anthony’s?

We both approached the piece as a universal human story. Our aim was to honour Puccini’s music and intention, and communicate the story with clarity. Naturally we also hoped to provide the audience with some aesthetic pleasures along the way! Anthony had a strong background in film so he was attracted by performances which are truthful and natural, working with the singers from the centre out. With my background as a dancer, and being a fan of Chinese and Japanese classical theatre, perhaps I have a tendency to discover the physicality of a performance first, then work backwards into the centre. But in the end these are just different means of achieving the same end.

What was the biggest challenge of the entire production?

Like many operas, Madama Butterfly has a strong heroine and the role of Ciocio-san is extremely demanding for a soprano. The character is 15 years old at the start of the opera, but few singers can tackle the role before they are at least in their mid-thirties, so they have to understand very well how to act like a young delicate girl, while at the same time producing this very mature, powerful sound. Some of the artists in the west have also had to work extra hard to turn themselves into a Japanese geisha! The wonderful and very blonde American soprano Patricia Racette, for instance, used to rehearse with her feet bound together, to train herself to take small elegant steps. I hasten to add this was entirely her own idea…

As a choreographer, how do you make use of space and timing? How does your grammar of choreography cohere with Anthony’s grammar of directing?

We could venture that Anthony provided the more naturalistic aspects of the production, the beating heart of the opera, and myself perhaps the more formal aspects, the skin that holds the blood. But this would be to over-delineate our collaboration. We were both just grateful to be allowed into the sandpit and played with each other’s toys frequently. 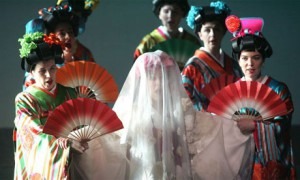 What would be your next breakthrough to come?

I don’t know about breakthrough, but my next project is Pilgrim’s Progress by Vaughan Williams at ENO this fall, to be directed by Yoshi Oida, followed by Parsifal at the Metropolitan Opera in New York, directed by Francois Girard. After that I may do a project in China.

Could you name one goal that you really want to accomplish in your life?

My goal is to enjoy everything and appreciate everything.

I believe you have a busy schedule splitting between family and career. How do you balance your time?

When I am working, I don’t think there is much balance to speak of! But for the first time I am thinking of taking a few months off next year to take stock, and also to spend time with my parents in Hong Kong and my son in the US.

What is the most important lesson your children can learn from you and Anthony?

I hope they will learn that they are the blue sky, and not the clouds which come and go.

What are your other passions ?

I like to read and to walk, but also to eat and to shop! I guess I am, after all, a Hong Kong girl…