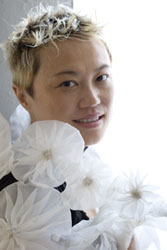 From the stunning red backdrop that opens Anthony Minghella’s Madame Butterfly, first staged at London’s ENO (2005) and then at The Met (2006), it is perfectly natural for dazzled audiences from worldwide to imagine the most complicated setting of the production team, possibly consisting of years and months of talent scouting to gather the like-minded. Han Feng, the costume designer who presents on stage a mesmerizing parade of fabrics, reveals otherwise. ‘One day, Anthony came to me and asked, “Have you done any operas? Me neither. Let’s have fun!” That was how it started.’ The director had been impressed by her fashion series, particularly the scarf collections. Han was then invited to attend operas and to join production meetings, during which she convinced the team with her thorough research and original concepts. “He liked my work and decided to adopt it- it was nothing complicated.”

Offering Han the greatest freedom to realize her concepts, Minghella suggested using her signature scarf elements on Ciocio-san’s wedding costumes. ‘The set designer also asked me to create a dramatic showcase that would make everyone cry. So I tried to create a fashion show. I was fortunate enough to have Anthony’s full support. He told me, “Whatever you do, I will follow.” ’ Such trust had prompted Han Feng’s daring use of red, the major colour of traditional Chinese wedding ceremonies. As a symbol of bliss and festivity, red also underlines the Chinese background of the designer. However, there were times when creativity had to be compromised. “The challenge was to make a forty-year-old soloist look like a 15-year-old Ciocio-san. But red is too sophisticated to suit a fifteen-year-old, so we chose white to outline her youth.” To reflect Madame Butterfly’s restricted financial status in later acts, her costumes were made of fragments from her kimono. As a coherent representation of Ciocio-san’s feature, an Asian female eager to fit into the American culture, Han dressed the protagonist in two pieces: top and skirt, made of previously featured costumes. Eventually Han Feng’s concept was launched in full, excluding the only minor adjustment: a darker red be used for the American Consul Sharpless’ tie as to match with the prevailing sadness. 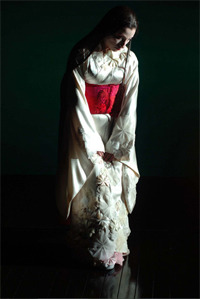 Having presented her work on one of the world’s most prestigious stages, the Han Feng label could only gain more recognition. “Perhaps now you would think my dream of being a fashion designer had come true. Truth is, I never had dreamt of becoming anything,” added the Shanghai-and-New-York-based fashion designer. Before her graduation from the China Academy of Fine Arts in Hangzhou in 1980s, Han Feng had only studied painting for around six months in high school. Despite her mother’s encouragement, Han was never really keen on pursuing an artistic career. Born in the time of the Cultural Revolution, the young Han could only be taught to think practical in a society that was lacking resources and far from materialistic.

It was not until a visit paid by her cousin from Shanghai when the concept of fashion was finally introduced to Han Feng. “I looked terrible in my outfits. My cousin stared at me for a while before picking a blouse and a skirt from my closet and said, “Put these on, they go well with each other.” That was the very first time I was told to wear clothes that match with each other.” Since then Han Feng continued to refine her closet collection, dressing herself as one of the most fashionable students. Even so, she did not dare to consider a lifelong career in designing clothes. “All I wanted was a job, and to be a good mother and wife.” 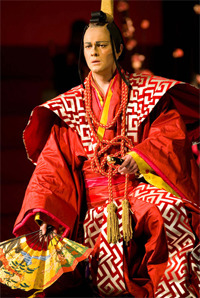 And so, Han left China for New York City in 1985 with passion and youth. Yet, one look in the streets had further enhanced her decision. “I looked around and realized my style was nothing special at all, so perhaps I should forget about becoming a fashion designer.” Instead, she became a fabric salesperson at Bloomingdale’s department store, where she seized every opportunity to acquire as much knowledge as she could. At the same time, she collected fabric fragments discarded by the store and transformed them into creations of her own- later known as her signature scarf collection. Then opportunities kept knocking at her door: her scarves had impressed so many customers that a PR firm approached Han for collaboration. “When a job comes to me, I would try my best to make it a good one. If people want me to do a certain thing, I will do it.”

Now the director of her own fashion label with numerous cross-disciplinary projects to work on, Han still reserves her practicality and persistence. “I do not know how to make business plans. I hate to be not real, otherwise it will only bring disappointment.” And she has a good reason: a designer has to cooperate with the management team and many others to satisfy consumer demand. The products have to be sold, otherwise a designer is nobody. In other words, sales are more important than designs, especially during these days when the market is flooded with generations after generations of new talents. “Every single card you hold has to be good. That said, the fashion world is too fast to predict- one can never tell what happens next. To me, the only rule is to be unique and good.” 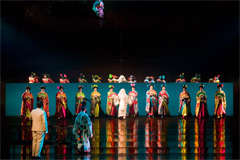 Perhaps the uniqueness of Han Feng’s designs comes with her own philosophy of lifestyle. Unlike the stereotypical fashionistas, she is never an aggressive preacher of materialism. “I always ask my clients the same question, “Do you really want it?” To me, the world is living a new lifestyle: less is more. If you do not need it, please throw it away. Each wardrobe only needs a few pieces of good quality to keep.” As for the designer herself, she is happy to have a place to live, to travel and to have two studios in Shanghai. “I do not own any houses or cars, but I am not planning to purchase any of these because buying restricts your freedom. I am happy to live with my birds, dogs and fishes. As long as I sleep well, eat well, dress well and travel well, life is giving me more than enough happiness to live. I live a simple life: to give the best and to seize the moment.”