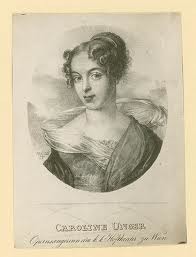 While in the waning stages of his relationship with Marie d’Agoult, Franz Liszt would deliberately forget to put their “fidelity ring” on his finger. “I felt a curious pleasure in abandoning this symbol of our union to chance,” he once remarked. In October 1839 they officially dissolved their relationship and Franz went on to the coastal town of Trieste for a sizzling reunion with an old idolized flame. The flame in question was the Austro-Hungarian contralto Caroline Unger, and their relationship dated back all the way to 1 December 1822. On that day, Franz gave his debut performance in the city of Vienna, sharing the stage with the then nineteen-year-old singer. Unger warbled an aria from Rossini’s opera “Demetrio e Polibio,” while Franz contributed the Hummel Concerto in A minor and a free fantasy. Newspapers reported that, “ a young virtuoso has, as it were, fallen from the clouds, and compels us to the highest admiration. The performance of this boy, for his age, borders on the incredible, and one is tempted to doubt any physical impossibility when one hears that young giant with unabated force, thunder out Hummel’s composition, so difficult and fatiguing, especially in the last movement.” Franzi, our eleven-year-old Hercules soon departed for Paris, while Caroline sang in the first performance of Beethoven’s “Ninth Symphony,” and was subsequently coached by Franz Schubert for her role as Dorabella in Mozart’s “Cosi fan tutte.” Caroline had a number of operas written for her, among them Vincenzo Bellini’s “La straniera,” Gaetano Donizetti’s “Parisina,” “Belisario,” and “Maria de Rudenz,” as well as Saverio Mercadante’s “Le due illustre rivali.” As a matter of fact, Caroline also composed a number of vocal compositions in French and in German. Once Caroline and Franzi met up in Trieste in 1839, Franzi had become Franz and was no little boy anymore! He soon had plenty of opportunity to prove his “ thunderous, inexhaustible and unabated force” in a slightly different setting. Although Franz protested that they were “simply good friends,” they soon traveled to Vienna together.

But Caroline, who married the French scholar François Sabatier in 1841 and retired from the stage a couple years later, could not hold Franz. Actually, nobody could, as Europe was ablaze with “Lisztomania.” In Moscow “ the ladies flocked around him like peasant boys on a country road around a traveler inquisitively examining him, his carriage, his cap, while in Rome it was impossible to count the ravishing celestial women who came to fall trembling, like poor little larks, at the feet of this terrible enchanter.” According to some reports, “princesses and beauties fought over the rind of an orange he had sucked and thrown away, and female fans stole his cigar butts and tucked them down their cleavages.” 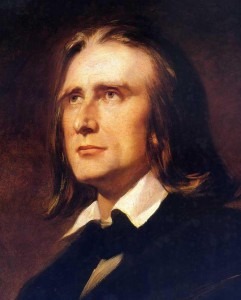 Groupies and beauty queens aside, Franz did meet a number of highly intelligent, well-educated and cultured women. Among them the Polish noblewomen Eveline Hańska, who is probably best remembered for her marriage to the French novelist Honoré de Balzac. Eveline was first married to a wealthy landowner — twenty years her senior — when she was a mere teenager. This first marriage produced five children, but only her daughter Anna survived. To overcome her depression, Eveline penned an anonymous letter to Balzac, which in turn sparked a decades-long correspondence. They first met in 1832, exchanged vows of patience and fidelity in 1833, and Balzac penned his novel “Séraphîta,” which includes a character based on Hańska. When Eveline’s first husband died in 1841, she and her daughter traveled to St. Petersburg in order to resolve some of the litigation issues surrounding her inheritance. As it happens, Franz Liszt was in town performing a series of recitals, and on more than one occasion, Eveline and Anna were in the audience. Eveline was mightily impressed by his musical talents and his good looks, and she described Franz as “an extraordinary mixture.” It is documented that they met on several occasions, but what happened during those meetings is still open for debate. According to some sources, Eveline “received Franz in her boudoir ankle-deep in rose pedals,” while others maintain that “she ultimately rejected his advances.” One zealous biographer finds “striking evidence of Eveline’s loyalty to Balzac.” Whatever the case may be, Eveline might not have bothered as Balzac certainly did not take the fidelity vow very seriously. He conducted affairs with several women and may actually have fathered children with two of them. Eventually, Eveline would marry Balzac in 1850, but the novelist died 5 months later. Franz, on the other hand, was off to Berlin to enjoy the company of Charlotte von Hagen. I tell you more about that encounter in the next episode.