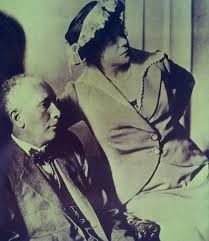 The fact that the names of the pitches of the scales are both consonants and vowels opens up a great deal of possibility in terms of hiding words in music. The alphabet that can be hidden is larger than you think: it’s not just the English A-B-C-D-E-F-G but also includes letters or sounds such as Es (E-flat in German), As (A-flat in German), H (B-natural in German), and Do-Re-Mi-Fa-Sol-La-Si/Ti-Do when you throw in solfege syllables.

They meant that Bach could put his name into his music simply as B-A-C-H (B-flat-A-C-B natural). But, what if you were in love and wanted to signal something to your beloved – immortalize her in music? If you’re Robert Schumann and involved with someone with the un-convertible name of Ernestine von Fricken (too many letters not in the scale), you look at the name of her town: Asch (A-E-flat-C-B-natural) and you use it as the basis for your piece, Carnaval, op. 9. And then, being Schumann, you notice that, shifted around, those letters are also in your name: S-C-H-A and also use that in Carnaval.

Alban Berg paired his initials A-B with that of his mistress, Hanna Fuchs-Robettin (A-F) in his Lyric Suite. 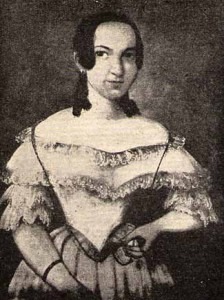 And, if your beloved was a fantasy, you could make her name fall within the A-G lettering scheme as Schumann did for the invented Countess Pauline von Abegg (A-B-flat-E-G-G) in his Abegg Variations, Op. 1. It should be noted that Schumann had met a pianist the previous year named Meta Abegg, and this work may actually have been an allusion to her – but he hid it under an invented title and a new first name.

Theme and Variations on the name Abegg, Op. 1

It was Richard Strauss, however, who immortalized not only his wife Pauline in the 1903 Symphonia Domestica but also his child and extended family. Pauline is represented not as a coded melody but with different themes depicting her personality. The entire tone poem represents, as Strauss noted, “a day in my family life. It will be partly lyrical, partly humorous – a triple fugue will bring together Papa, Mama and Baby.” As an autobiographical work, each participant has their own theme; a 1904 analysis summarized these as:

The husband’s themes: (a) Easy-going; (b) Dreamy; (c) Fiery
The wife’s themes: (a) Lively and gay; (b) Grazioso
The child’s theme: Tranquil

The Adagio contains the famous love scene that shows Pauline’s theme above that of the composer’s – for many listeners, this was a bit too autobiographical! For more on the beloved but ever-exasperating Pauline, see an earlier article in Interlude.

Next time we’ll take on the reverse of the Immortalized Beloveds: the Immoral Beloveds who didn’t love their composer spouses as much as we do now and caused all sorts of problems in their lives. Burned manuscripts and discarded lovers were the least of it!