We all know that music may melt the heart of stone! And that was seemingly the case when Mr. Hampton heard the Légende by superstar violinist and composer Henryk Wieniawski (1835-1880). You see, Henryk had fallen in love with Isabella Hampton but her father was completely against the union and wanted his daughter to marry a man with a more solid financial background. But when he heard the Légende, composed under Isabella’s spell, his resistance to the marriage was broken. At least that’s the popular version of events, and it certainly makes for interesting reading. As in most cases, however, reality is rather more prosaic. 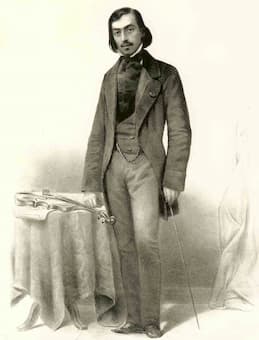 It is true that Henryk Wieniawski was one of the most celebrated violin virtuosos and composers in the 19th century. He performed numerous concerts in Russia, Germany, Austria, Holland, Belgium, and with his friend Anton Rubinstein in Paris as well. In the autumn of 1858 he traveled to Britain at the invitation of the well-known impresario, composer and conductor Louis Antoine Jullien to participate in the 20th annual series of concerts at the Royal Lyceum Theatre. Over the next seven weeks, Wieniawski took part in roughly 40 concerts and according to the weekly magazine “Musical World,” “concert goers stormed the theatre box-office day and night for tickets.” Further engagements were quickly scheduled for Manchester, Brighton, Glasgow, Leeds, Liverpool, Birmingham, Dublin, and Belfast. By February 1859, he was an esteemed member of the London Beethoven Quartet Society, playing alongside Heinrich Wilhelm Ernst, Joseph Joachim and Alfred Piatti. 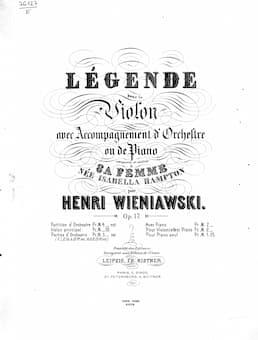 In April 1859, Anton Rubinstein introduced him to the Hampton family, and when Henryk laid eyes on Isabella, his fate was sealed. Isabella’s mother Elizabeth was the sister of the famed pianist and composer George Osborne, and she was seemingly happy to welcome Henryk into the family. That clearly was not the case with Mr. Hampton, who had great respect for musicians but also was wise enough to the world to understand the frequent bohemian lifestyle practices of performing artists. Henryk, however, would not be deterred. He writes to his Brussels impresario, “I don’t know whether you have heard that I wish to marry a young English woman whom I love more deeply than the finest Stradivarius or Guarneri.” As it turns out, it wasn’t Wieniawski Légende that melted Mr. Hampton’s heart, but the condition that his future son-in-law take out a life-insurance policy for the considerable sum of 200,000 franc! 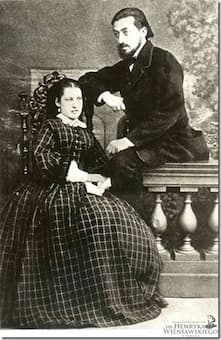 With money matters taken care of, Henryk’s future father-in-law imposed a second condition, one of getting a proper job and settling down to married life. As such, Henryk applied for the prestigious post of soloist at the St. Petersburg court. Anton Rubinstein once more was laying the groundwork, and on 25 April 1860 Wieniawski’s appointment was approved. And thus it was time to plan for the wedding. The blessed event took place on 8 August 1860 at the Church of St. Andrew in Paris. Anton Rubinstein gave away the blushing bride, and Gioacchino Rossini was enrolled as a witness. Finally, Henri Vieuxtemps played the violin during the ceremony. The newlyweds first traveled to London to receive the blessings of Isabella’s parents, and then went to Lublin to see Henryk’s parents before heading to St. Petersburg. Music may melt the heart of stone, but a good life-insurance policy will almost certainly do the trick!