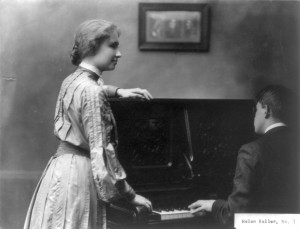 Helen Keller was born in Tuscumbria, Alabama, in the summer of 1880. Nineteen months later, she fell ill (likely with scarlet fever or meningitis) and became deaf and blind.

As Helen grew up, she communicated in a rudimentary way with her family, but it became increasingly clear that she’d benefit from the help of a trained teacher. So in 1887, the Kellers hired a twenty-year-old governess named Anne Sullivan, who was visually impaired herself and a recent graduate of the Perkins School for the Blind.

Anne had learned to communicate with a deaf and blind friend at the Perkins School by pressing sign language into her palm, and so she began teaching Helen using the same method. It took a few weeks, but once Helen realized that sign language was describing things around her, her appetite for learning and communication became insatiable. With Anne at her side, Helen attended schools for the blind, deaf, and young ladies. Ultimately she graduated from prestigious Radcliffe College, then embarked on a successful career as lecturer, author, and political activist.

Helen Keller had a unique relationship with music. Obviously, she couldn’t hear it with her ears, but she certainly felt it with her body! Here is a video of her “listening” to mezzo-soprano Gladys Swarthout by touching the singer’s throat: 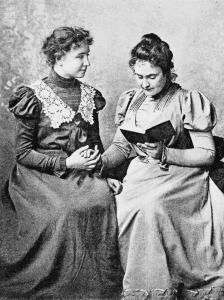 Watching that remarkable video, it’s clear how sensitive Helen was to phrases, changing dynamics, and the accompaniment of the piano. Maybe listening is a more physical experience than we give it credit for!

But Helen’s most famous musical encounter came when she listened to the New York Symphony playing Beethoven’s ninth symphony on the radio. She wrote the orchestra a letter describing her experience:

Last night, when the family was listening to your wonderful rendering of the immortal symphony someone suggested that I put my hand on the receiver and see if I could get any of the vibrations. He unscrewed the cap, and I lightly touched the sensitive diaphragm. What was my amazement to discover that I could feel, not only the vibration, but also the impassioned rhythm, the throb and the urge of the music! The intertwined and intermingling vibrations from different instruments enchanted me. I could actually distinguish the cornets, the roll of the drums, deep-toned violas and violins singing in exquisite unison. How the lovely speech of the violins flowed and plowed over the deepest tones of the other instruments! When the human voices leaped up thrilling from the surge of harmony, I recognized them instantly as voices more ecstatic, upcurving swift and flame-like, until my heart almost stood still. The women’s voices seemed an embodiment of all the angelic voices rushing in a harmonious flood of beautiful and inspiring sound. The great chorus throbbed against my fingers with poignant pause and flow. Then all the instruments and voices together burst forth – an ocean of heavenly vibration – and died away like winds when the atom is spent, ending in a delicate shower of sweet notes.

Helen’s awe at Beethoven 9 is even more meaningful when you remember Beethoven’s own struggle with deafness.