Blog
Gli italiani a Londra: The Invasion of the Italians
by Maureen Buja July 6th, 2015 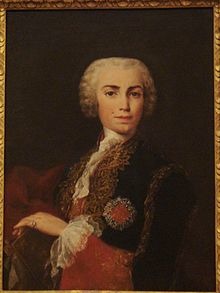 London occupies a unique place in the musical life of the world. It has been a focus for musicians and musical happenings since the 17th century and it was London that the leading composers of the day came to make their names and possibly fortunes. Among those composers we can list Handel, Mozart, Haydn, Chopin, Mendelssohn, Verdi, Wagner and even more in the 20th century.

In the 18th century, however, all that was great and good in London was Italian. Because the Italian singers were regarded as the best in the world, various London companies would bring them in, pay them huge fees, and then try to make the money back as quickly as possible. Castrato singers, men who sang in the soprano and alto ranges, were the star of the day and singers such as Farinelli commanded top money. If you wanted to bring in the star singers, you needed to stage operas in Italian. This meant, as one scholar put it, that London was the host of operas in a language that most of its inhabitants didn’t understand.
Farinelli’s first hit in London was in the pasticcio opera Artaserse, with music by Johann Hasse and Farinelli’s brother, Riccardo Broschi. 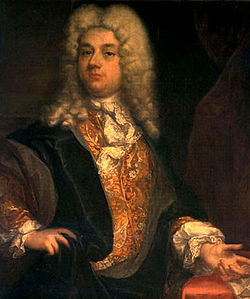 Hasse: Artaserse: “Per questo dolce amplesso” (Vivica Genaux, mezzo-soprano; Berlin Akademie fur Alte Musik; Rene Jacobs, Conductor)
Handel came to London to write Italian opera and was alternatively successful and unsuccessful. He went bankrupt with astonishing quickness and then return again to try and capture his audience’s attention. From 1720 to 1728, however, he was part of the Royal Academy and in those 8 years wrote a dozen operas that became the highlight of the Italian opera season in London. The Italian contralto Senesino created 17 leading roles for Handel (including Giulio Cesare, Orlando, and Bertarido in Rodelinda)
Handel: Rodelinda: Act I Scene 6: Aria: Dove sei, amato bene! (Bertarido) (Daniel Taylor, counter-tenor; Raglan Baroque Players; Nicholas Kraemer, Conductor 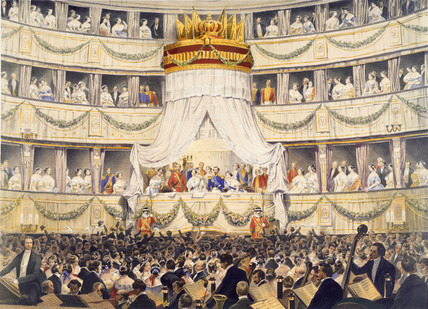 The State Visit to the Royal Italian Opera House, 1855

Eventually the Royal Academy failed, and Handel’s Italian singers, such as Senesino, were taken over by his rivals. It was a time of artistic triumph matched with financial ruin; opera producers could not afford to import Italian singers anymore and new opera companies failed every year. Most operas failed as well, being performed once and never revived.
It was only the popularity of John Gay’s very British Beggar’s Opera that kept English opera afloat.
It’s interesting to see how long this Italian influence continued. Even though its height of popularity was in the 1720s, when the second Covent Garden opera house was remodeled in 1847, it opened as the Royal Italian Opera. It wasn’t until Mahler came to Covent Garden in 1892 with Wagner’s Ring cycle that the word “Italian” was quietly dropped from the name of the house.