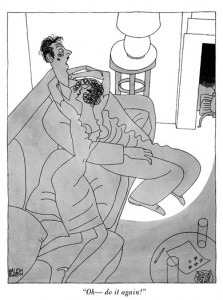 It started like a fairy tale, as it often does. In 1925, she was the hottest French musical ticket in New York City. Germaine Tailleferre had just arrived on a huge wave of personal and artistic success stemming from her association with “Les Six.” Leopold Stokowski and pianist Alfred Cortot premiered her Concerto for Piano and Orchestra in Philadelphia to great critical acclaim and huge popular success. And when she featured as soloist in her concerto under Mengelberg in New York, Cortot was playing the work in Boston under Koussevitzky the very same evening. The glint in her eye was an advisory editor and prominent contributor to The New Yorker magazine, providing theatrical caricatures and short reviews. Ralph Barton also had highly specific tastes in champagne, wine, cigarettes, drawing pens, paper and ink. By all accounts he was “remarkably tidy in person and, in his work, rapid but tardy. He loathed mathematics, cannot drive, is sick of jazz, rarely touches gin or whiskey but is extremely fond of Château Yquem, and has been in love ninety-two times in all and remembers each of the girls’ names.” And within weeks of their first meeting, Germaine became his fourth wife. 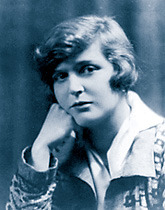 Barton was an ardent Francophile who had first travelled to Paris in 1915 to study art and to report the war in pictures. Known as the “commuter” by friends and colleagues, Barton ran a lively salon that quickly became an important New York cultural center. He counted Charlie Chaplin, Sinclair Lewis, Paul Robeson and Somerset Maugham among his illustrious guests. At one soirée Tailleferre played a four-hand transcription with George Gershwin of his Rhapsody in Blue. After an exciting yet comparatively brief honeymoon period, however, Barton grew increasingly jealous of Tailleferre’s growing success and popularity. He openly told her that he thought little of her compositions and actively discouraged her from composing. As tensions increased, the couple departed for France in hopes of jumpstarting their relationship. While Tailleferre continued her blazing career as a composer and performer, Barton’s frequent long stays in France got him in trouble with his magazine job back home. Although he was made a chevalier of the Legion of Honor in 1927, his psychological disorder—having been diagnosed as a manic-depressive—worsened. In the event, the marriage could not be saved and the couple divorces in 1929. 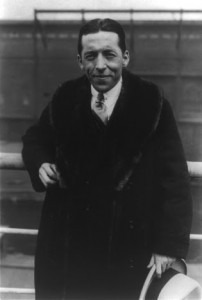 One month after his divorce from Germaine was finalized in 1931, Barton typed out a long note, which he titled “OBIT” in red ink. “He placed it next to an illustration of a human heart, and got into bed in silk pajamas. While holding a cigarette in his left hand, Barton shot himself through the right temple, three months short of his 40th birthday.

“Any sane doctor knows that the reasons for suicide are invariably psychopathological and the true suicide type manufactures his own difficulties,” he writes. “I have had an exceptionally glamorous life, as life goes; and I have had more than my share of affection and appreciation. I have always had excellent health, but since my early childhood I have suffered from a melancholia, which in the last five years has begun to show definite symptoms of manic-depressive insanity. I have run from wife to wife, from house to house and from country to country in a ridiculous effort to escape from myself.” 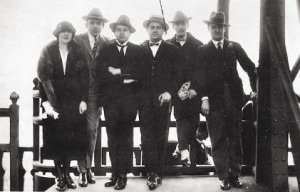 Putting the misery of her failed marriage behind, Tailleferre gave birth to her daughter Francoise—who eventually became a concert pianist in her own right—in 1931. One year later she married the father, the French lawyer Jean Lageat. Although she was once again discouraged from composition, the marriage lasted for 24 years. Not surprisingly, however, the union also ended in divorce in 1955. Although Tailleferre dealt with the insecurity of men throughout her life, she never lost faith in her ability to create, or in her devotion to love. “Love,” she writes, “is the emblem of eternity; it confounds all notion of time; effaces all memory of a beginning, all fear of an end.”