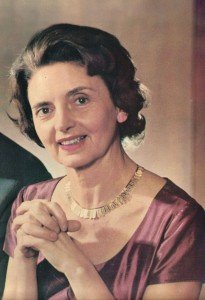 French pianist Gaby Casadesus (1901-1999), like her husband, Robert Casadesus, studied at the Paris Conservatoire with Marguerite Long and was awarded the first prize in piano at age 16. Also like her husband, she knew the best composers of the country: Claude Debussy, Maurice Ravel, Gabriel Fauré, Florent Schmitt, and Moritz Moszkowski, and was a prominent performer of their works, guided, it is said, by close work with the composers themselves.

In addition to her solo career, she also had an extensive duo career with fellow Paris Conservatoire student Robert Casadesus, whom she married in 1921.

A non-French composer who she also specialized in was Felix Mendelssohn. In this recording of 12 of Mendelssohn’s Songs without Words, we understand immediately that seemingly oxymoronic title. These truly sing yes without words.

As part of her wide-ranging interests, she also performed chamber music, most famously with her Princeton neighbour Albert Einstein, for a 1942 charity performance at the Present Day Club in Princeton. They performed one of Mozart’s sonatas for violin and piano. 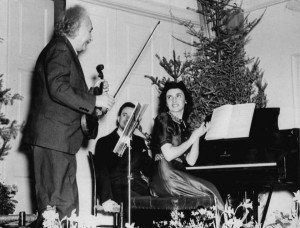 Saint-Saëns: Le carnaval des animaux: XII. Le Cygne (The Swan) (version for cello and piano) (Yo-Yo Ma, cello; Gaby Casadesus, piano)
Through her long career, Gaby Casadesus was also a teacher, first in Paris and then in the US when the couple moved there because of WWII. To carry the Casadesus name forward, she was one of the three founders of the Robert Casadesus International Piano Competition; in 1994, it changed its name to the Cleveland International Piano Competition. Gaby and Robert’s son, Jean Casadesus (1927-1972), was also a noted pianist, and together, the three were known for their performances of Bach’s concertos for two or three keyboards.