Blog
Food and Meals as the Cue in Operas
by Maureen Buja September 1st, 2022

Meals and food in operas can be dramatic turning points – let’s look at how they can help us understand the character more deeply or provide the push for the action.

At the very end of Mozart’s Don Giovanni, the dinner is on the table, Leporello is trying to sneak a bite, and Don Giovanni gluttonously partakes of the feast. Leporello and Giovanni end up in a duet about eating where Don Giovanni declares, cruelly, that the greatest satisfaction comes from eating delicious food while someone hungry looks on. Donna Elvira arrives and Giovanni taunts her by equating women and wine, consumables, as the ‘support and glory of humankind’. It’s the late-arriving guest, however, that sets up Don Giovanni’s final downfall.

Could this scene have worked as well just as a confrontation on the street? Or in the living room? No, it needs the added dimension of food to set it off. All the senses are engaged during this scene – from taste (eating and drinking), smell (all that food again) hearing (that knocking at the door), sight (the appearance of the Stone Guest), and then, finally, touch, as the cold hand of the Commendatore drags Giovanni down to the depths.


The opening party in La Traviata gives rise to Alfredo’s rousing drinking song, the brindisi. The partygoers take up their glasses and toast each other and it provides a wonderful atmosphere of congeniality. Yet, this bright song is the other side of Violetta’s tragedy as the next scene has our heroine quietly coughing in the corner and warning us of the tragedy ahead. 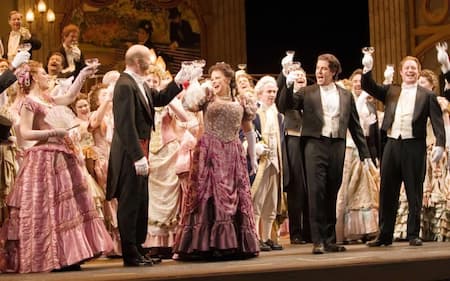 
At the beginning of Verdi’s Falstaff, Falstaff and his servants are drinking at an inn – the scene permits us to see how Falstaff’s lack of money to pay the bill starts his attempts at seducing rich men’s wives. They, however, have his measure and turn the tables on him. The public setting of the inn and the drinking also show us how Falstaff gets accused of burglarizing Dr. Cajus’ house and one of his servants of picking the doctor’s pocket – this clearly is not a crowd to be trusted. Again, it’s the setting of the inn that makes this kind of revelation possible, and also possible for Falstaff to walk away from it.


In Tosca, the second act is a supper scene. Scarpia is at supper when Tosca arrives, which is why there is a knife available when she decides that, with the safe conduct for herself and Cavaradossi in hand, she can give him her fatal ‘kiss’. 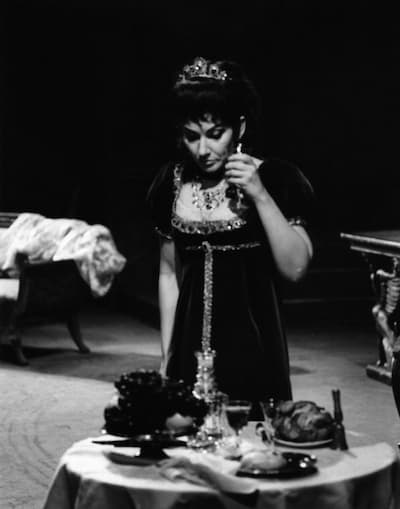 In Hänsel und Gretel, it’s the breaking of the milk jug (after Hänsel has been surreptitiously tasting the cream on top), that is the spark for the children’s exasperated mother to send them out to the forest for strawberries. The witch’s gingerbread house is another food cue – it’s after nibbling on the house that the children become the witch’s prisoners. Hänsel is to be fattened up with raisins and almonds. In the end, the witch is pushed into the oven and all the edible gingerbread children are returned to their original bodies. There’s food everywhere in this opera and yet, without all of it, the actions of the opera couldn’t really happen. 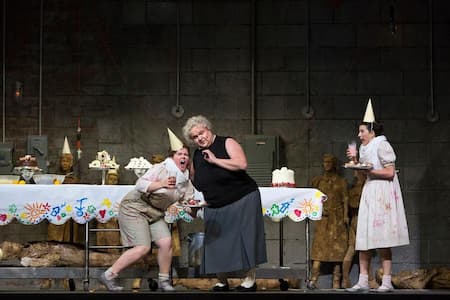 
The meals on the table provide give us ways to understand the characters (selfish, greedy, or hungry), provide the necessary weapons, or give the impetus for the action of the story. Don’t ignore the table or what’s on it!