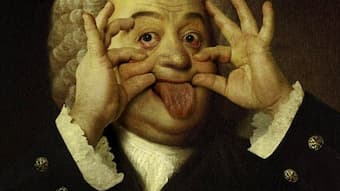 We were thinking about Bach’s Goldberg Variations the other evening. Written, as related by Bach’s biographer Johann Forkel, for the ill and often sleepless Count Kaiserling, who wished for some night music that was both smooth and lively enough to engage his attention during his insomniac periods, Bach produced his variation set for the Count and it was published in 1741. We were thinking that the Variations would be perfect for all our pandemic insomnia.


But what if you don’t happen to have a harpsichord around? What then? Luckily, we found the Goldberg Variations in arrangements for any number of groups with any number of players.

The most obvious first arrangement is for the piano, which has a greater dynamic range than the plucked harpsichord.


Another interesting version of this is the one performed by Wilhelm Kempff removing all ornamentation.


An arrangement for organ presumes that somewhere about your bedroom (or in the bedroom’s antechamber), you have an organ that might be pressed into service for your sleepless night. The temptation to throw all the resources of an organ into the work might be self-defeating if you’re trying to get someone to sleep…..sleeeep…..sleeeeeep.


Still want to play it on a keyboard, but all you have to hand is an accordion? Then you can take advantage of the fact that you can keep a drone running in the bass while your other hand does the melodic motions. It’s an interesting take on the work, though, almost a mediation on the Aria.


The arrangement for harp is not unlike the original for the harpsichord but the ornamentation is a bit more difficult. On the other hand, more idiomatic harp ornamentation can be substituted.


If you’re like Berlioz, though, and don’t play the piano, but do play the guitar, there’s a version for you.


We started with the usual Goldbergs for keyboard instruments: harpsichord, piano, organ and then expanding to accordion, harp, and guitar. If you have more instrumentalists around you, then there are more arrangements that might fit your taste for sleepy-time music.

Perhaps you have 2 friends who are willing to help you catch some winks and who also happen to have brought two pianos with them.


How about something for a more exotic instrument? Arranged for two cimbaloms, a Hungarian instrument played with two cotton-tipped sticks, this version places us somewhere between the harpsichord and the piano. The strings are struck, like a piano, but, like a harpsichord, there’s very little vibration. The sound just dies away.


How about 2 guitars? When you get into the pieces written for 4 voices, having those additional notes can be quite helpful.


And then, if you have a 10-string guitar, rather than the normal 6 strings, the sound changes immensely. There’s more depth and more motion.


If we use an instrument from Bach’s time, i.e., a viola da gamba, then we have an interesting throwback to a contemporary sound but with an unusual twist in instrumentation.


Arranged for cello and piano, the cello takes the melody while the piano quietly fills in the background. This frees the cello to play with the ornamentation above and the piano provides the other voices.


An unusual combination, although true to Bach’s time, is recorder and organ. Just as with the cello and piano arrangement, this combination permits the voices to be split up into a melody and support. 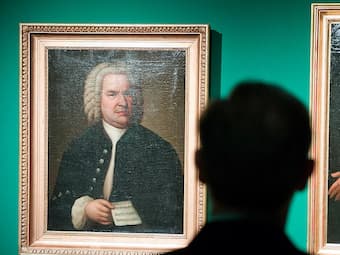 Dmitry Sitkovetsky (b. 1954) came from an exceptionally music family. His mother Bella Davidovich was winner of the 1949 Chopin Competition, and his father Julian Sitkovetsky had not only won international competitions but also had made a name for performance before his death at age 32. Sitkovetsky started his studies at the Moscow Conservatory and finished them at the Juilliard School. He made his name first as a violinist, then as a conductor, and continues to be busy on both fronts. He also is known for his arrangements of the Goldberg Variations for both string trio and orchestra, and here’s one of them, with him performing the violin part.


An arrangement for violin, cello, and guitar is interesting for how the voices move between the instruments – first the guitar has the melody, then the violin weaves in and out, with the cello below. The use of the plucked guitar returns us, in a sense, to the earliest versions for harpsichord, but with a completely different timbre.


Abandoning all intention of following contemporary usage, we can explore new sounds and combinations, such as this one for recorder, alto sax, and percussion.


And now we can expand to four – five – and more voices, up to orchestral size.

First for string quartet. On the fughetta, it’s a perfect fit for the 4 voices of the fugal pattern.


When we listen to the same movement arranged for string quintet, we can appreciate the greater bass support given by the double bass.


Arranged for recorder quintet, the arrangement can take advantage of the different recorder size, so the timbre stays with its woody sound, but all notes in the pitch range can be played. This movement is played on Soprano, Tenor, Great Bass, Contra- Bass, and Sub-Contrabass recorders.


When arranged for saxophone ensemble, the tone changes to one that is more nasal and less flowing than the recorder arrangements. The saxophone keys make it difficult to use the same kind of legato that the recorders did. This arrangement was for Soprano, Alto, Tenor, and Baritone saxophones.


When we switch to brass instruments, the sound changes entirely and become more like a Gabrieli work for San Marco!


In this arrangement for percussion ensemble, it’s the pitched instruments of percussion that come to the fore.


Canadian conductor Bernard Labadie, citing precedent in Baroque arrangements of Baroque works, decided to do an arrangement of the Goldberg Variations for string orchestra with basso continuo as if he were a musician of Bach’s day. He translated things that were pure keyboard idioms into language that would have been more familiar to string players of the time. He sees it as creating “something new from something old, exactly as a Baroque musician would have done.”


This transcription of the Goldberg Variations took as its start the arrangement for chamber orchestra done by Bernard Labadie in 1999 but has been further refined by the ensemble to adhere closer to Baroque performance practices. The Parnassi Musici arrangement was created for Bach’s 250th anniversary in 2000. Here, the aria is played by flute, viola da gamba, and a basso continuo made up of lute and cello.


So, the last ensemble we can arrange this for is orchestra, albeit a chamber orchestra. In the fughetta (Variation 10), the force of the orchestra on each of the voices comes out beautifully.