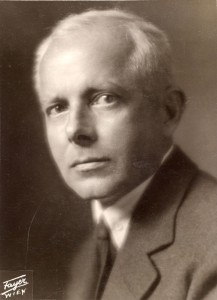 We are most familiar with a ‘cantata’ as a sacred work, usually on a subject from the Bible, that’s written for vocalists. For Béla Bartók to write a work entitled ‘Cantata Profana’ is to write an oxymoron. Yet, if we consider Bartók’s beliefs, we may get closer to his use of the word ‘cantata.’

Bartók genuinely believed in the unity of all men and, in his music, sought to use the folk music of not only his country but also those of surrounding regions to underscore this point. His Cantata profana, BB 100, “A kilenc csodaszarvas” (The 9 Enchanted Stags) was intended to be part of a trio of works, each based on a different country’ songs. The first (and only) one is based on a Romanian song-type called the colinda, which were ballads generally sung during Christmas. 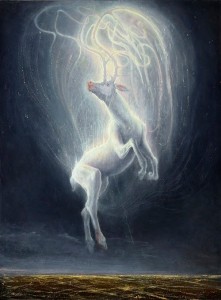 An enchanted stag by Agostino Arrivabene

The 9 Enchanted Stags of the title were 9 brothers, brought up in the forest, who were taught by their father only to hunt. One day, they crossed an enchanted bridge, hunting a large stag, and were themselves changed into stags. Their father goes out to find them, bringing his gun, and sights on the largest stag, who pleads with him not to shoot as he is his son. The father recognized him and the others and pleads for them to come home, but they cannot, as their antlers will no longer fit through doors. They cannot drink from the wine glass their mother is holding for them but only from mountain streams.

The first movement opens with a rising scale until the choir enters singing about the boys’ knowledge of only the hunt. The unusual scale immediately puts us into a strange scenario. Through the use of fugue (03:47), we have the hunt in music – wild horn call and drums signalling the action. Vocal fugues are fairly rare in the 20th century and it’s a delight to hear what Bartók does here, with the voices and the instruments together. As they approach the ensorcelled bridge, the music changes to something much more mysterious (06:27).

Cantata profana, BB 100, “A kilenc csodaszarvas” (The 9 Enchanted Stags): I. Volt egy oreg apo (Once there was an old man): Molto moderato (Jozsef Reti, tenor; Jozsef Gregor, bass; Hungarian Radio and Television Chorus; Budapest Symphony Orchestra; Antal Doráti, cond.)
The second movement describes the father’s search for his sons. When he finds them, the tenor solo is that of the eldest son (02:01) and it grows quite impassioned. The chorus comments and the baritone soloist responds as the father (03:44) imploring his 9 lost sons to come home.

II. Az erdoket jarta, hej-haj! (Through forest aroving, hey-yah!): Andante
The final movement is a brief summary of the entire story, told now by the chorus.

III. Volt egy oreg apo (Once there was an old man): Moderato
This work completed in 1930, had its premiere in London in 1934 by the BBC Symphony Orchestra and Wireless Chorus conducted by Aylmer Buesst as a broadcast. The work is a profound statement on achievement and loss as well as a commentary of what one must give up to gain independence and freedom. It has also been taken as reflection of the problems in Europe, suffering under the problems of the 1929 Stock Market crash and the rise of problematic rulers across Europe.