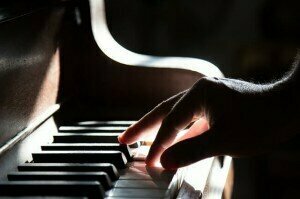 Play always as if the presence of a master
– Robert Schumann

The ability to self-critique, evaluate and reflect on one’s playing during practicing is a crucial skill for musicians, and is a component of the skillset of “deliberate practice”, which enables us to practice productively and deeply.

Around 95% of my teaching involves showing students how to practice. Many students are “surface practicers”: that is, they play the assigned repertoire from start to finish, but do not take time to reflect on or evaluate their playing – the sounds they are making and hope to make, why a certain passage is causing difficulties etc. Students who practice like this often feel that having got to the end of the piece they have “done” their practicing. As a consequence, lessons and subsequent practicing sessions may feel frustrating because progress/improvement is slow.

I admit that I probably practiced like this for quite a lot of the time when I was having lessons as a child and teenager, and it was only when I returned to the piano seriously as an adult, after a break of nearly 20 years, and started taking lessons with a master teacher, that I learnt and understood the benefits of deep, reflective practicing. It quickly became apparent that this kind of practicing was far more productive: the most noticeable benefit was that I was able to learn repertoire much more quickly and, more importantly, retain it once learnt. It also made me far less reliant on guidance from my teacher, enabling me to work independently for long stretches of time (4 to 6 weeks) between lessons, which in turn motivated me to keep going.

C P E Bach: Solfeggio in C minor
During lessons, my students are now very used to being asked simple questions to encourage self-reflection and self-critique: “What did you like about your playing?” “Which areas need more attention?” “How do you think you should practice that section?” When I first instituted this practice of self-critique within lessons, most students focused on the negative aspects of their playing, highlighting mistakes or telling me that they “played it better at home”, and were reluctant to indicate areas which they felt were good or successful. Now they are used to finding positives first, giving themselves a virtual “pat on the back” for playing well. This approach is empowering for the student, because it builds confidence, which then makes analysing those aspects within the music which need more detailed attention a far more positive experience, rather than an exercise in flagging up errors, which can be dismotivating. When this activity becomes routine in lessons, so it should also be habitual when practicing between lessons from simple statements like “I really liked that passage” or “I’m pleased with the expression I brought to that section” to more detailed analysis of how to make significant improvements in the music. By working in this way, students become less reliant on a teacher’s guidance and develop independence in learning processes and confidence in their own abilities. 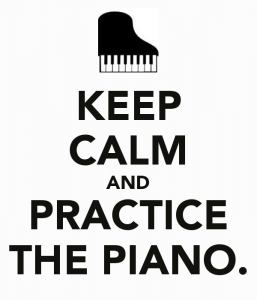 Schumann’s quote at the beginning of this article is particularly pertinent: there is no point in “surface” or repetitive practicing without concentration, but there is every point in practicing attentively and mindfully, as if your teacher (“master”) were listening. When practicing alone, be your own “master” and question everything you do. Why repeat that passage? What was wrong with it and what are you trying to improve? Going through a piece and working on the most problematic or tricky areas slowly and deliberately is an effective strategy, one which is used by professional and highly advanced musicians. Accomplished performers at every level also tend to have a clear auditory “vision” of the piece in their mind as they work on it and continually assess their progress against this vision. Perhaps the most satisfying aspect of working like this is that one does not need to spend hours and hours at the piano: because it’s about quality rather than quantity of practice.

Schumann: Traumerei
As one grows more adept at self-evaluation, reflection and self-critique, one is able to set clear, achievable and appropriate goals for each practice session (some people like to keep a record of these in a notebook, referring back to them and updating them as daily practicing progresses) and build incrementally upon each small improvement (“marginal gain learning”).

Recording and filming practice and performance is another key tool in evaluating progress. Our music sounds different when heard away from the piano. Never listen to a recording as soon as you’ve made it: wait a few days and then listen. Be positively critical and assess what you like and dislike about your performance. And don’t just listen once: use repeated listenings to evaluate aspects such as rhythm, intonation, tone quality, expression, dynamic range. Video is helpful too, for checking posture (in particular stiff or raised shoulders), gestures and mannerisms, grimacing/smiling, and stage presence.

Most of us engage in music because we care passionately about it and love what we do. However, when evaluating our work, it is important to retain a degree of detachment, to stand back from the music and view it dispassionately, as if reviewing someone else’s performance. Thus we are able to separate ourselves, emotionally, from our music making and take errors less personally, which allows us to maintain a positive mindset and keep the habit of practising enjoyable and stimulating.

…the real pleasure of practice lies in engaging in a creative dialogue with the music, and thus getting closer to it.
– Steven Isserlis, cellist