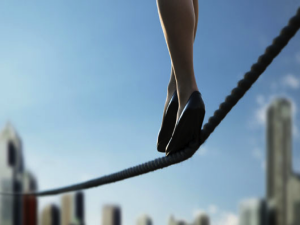 If I had a pound for every time a student said this in a lesson, I’d be a rich woman by now! We’ve all heard it, and I know I’ve been guilty of saying it myself occasionally at piano lessons with my own teacher. I’ve even been tempted to put up a sign next to the piano banning this phrase. Why? Because it’s a “given” that we play better at home. Of course we do. I suspect even top flight professionals play better in the comfort of the familiar surroundings of their own home or music studio. And it’s that familiarity that makes playing at home so much easier, less stressful and often more successful than playing in front of a teacher, examiner or audience.

Bach: Invention no. 13 in A minor / Simone Dinnerstein
My own teacher has a nice image of a tightrope to illustrate the different levels of tension and stress we encounter in different playing scenarios. When practising and playing at home, the tightrope is easy to negotiate, very close to the ground, or even right on the ground, and should you fall off, you won’t hurt yourself. But as soon as you leave the familiar, safe surroundings of your own home or music studio to play for or in front of someone else, the tightrope gets higher and the fear of falling (and failing) is that much greater. Perhaps the highest and potentially most risky musical tightrope is the public performance.

Beethoven: Piano Sonata no. 25 in G major, Op 79, 2nd movt
My students know me well enough by now to avoid saying “I played it better at home”. There are several reasons why I discourage students from trotting out this phrase before or immediately after they have played a piece or section of a piece to me:

• I am keen to encourage a positive attitude to one’s music making. I apply this positive approach to my own music making and my teaching. Using techniques drawn from Neuro-Linguistic Programming and Cognitive Behaviourial Therapy I aim to turn negative self-talk into messages of positive affirmation which encourage confidence.

• While the statement I played it better at home may be true, deciding not to say or even think this is helpful in fostering a positive attitude to one’s playing, which in turn encourages more confident music making.

• Pre-empting a performance with the statement I played it better at home immediately sets up negative feelings and a greater possibility for errors because your awareness of your anxiety is heightened.

• The memory of a good performance in the comfort of one’s home can be used to reinforce positive feelings when playing for others – in an exam, audition or concert – and is a useful tool in countering anxiety and encouraging a good performance. Equally, when in a stressful performance situation, imagine you are at your piano at home, feeling (reasonably) relaxed and comfortable as you play.

• Change the message: rather than I played it better at home, maybe try thinking I played well at home, I have done my practising and preparation and I am ready to play well now

• In a performance situation, instead of saying I am nervous, try saying I am excited. This simple change of vocabulary immediately turns a negative message into a positive one.