In Tune Society
Elphie has landed in Hamburg!
by Georg Predota January 22nd, 2017 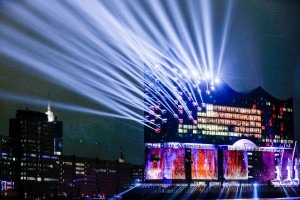 The project was delayed by 7 years, and overran its projected budget by 700 Million Euros! But finally, the Elbphilharmonie in Hamburg—tenderly referred to as “Elphie” has landed! Placing a wave of glass on top of several refurbished old harbor storage buildings, the architects Herzog & de Meuron have actually created a city within a city!

Features three concert halls, a hotel with 244 rooms, and 44 luxury apartments, this structure also includes a 360 degree viewing platform—reached via an 80 meter escalator—that majestically overlooks the city of Hamburg. From the outside, it looks like an enormous vessel moored at Hamburg harbor. But once you step into the great concert hall, you feel transported into an otherworldly organic spaceship from some distant galaxy. This sense of alien inspiration is reinforced by the sound properties of the hall. To exclude acoustic interference, the concert hall is actually floating! Would you believe that it is attached via a system of steel springs to the outer walls of the building? This sounding cocoon is the brainchild of acoustician Yasuhisa Toyota, who is responsible for the exquisite sound of LA’s Disney Hall, Suntory Hall in Tokyo and the Bard College Performing Arts Center in New York, among various others. In addition, by utilizing 10,000 unique acoustic tiles that cover almost every inch of the interior concert hall, Toyota created a crystalline chamber of clarity. Every tone and every harmony is almost painfully transparent, seemingly created in the cold vacuum of space. But what is more, the acoustic sounds created in the hall are translated into digital signals and visually projected to the outside world. As such, music becomes a symphony of colors effortlessly pulsating and glowing over the waters of the Elbe River. 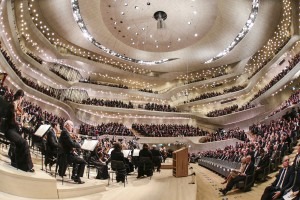 Now that this extraordinary symbiotic structure is in place, it has to be filled with music. And Europe has a seemingly easy task, because it has an unbroken tradition of Classical music that continues with a thriving contemporary classical music scene. And the arrival of Elphie has truly created the sounding forum for the 21st century. That idea was reflected in the opening program, a Suite that seamlessly combined music from the Renaissance with contemporary compositions. Alternating between Britten, Dutilleux, Cavaliere, Zimmermann, Praetorius, Liebermann, Caccini and Messiaen in the first half, and sounding Wagner, Rihm and Beethoven in the second, Thomas Hengelbrock and the NDR Elbphilharmonie Orchestra presented a program that simultaneously paid tribute to European musical heritage and future while revealing the acoustic possibilities of the Elphie Concert Hall. In keeping with the times, musical selections were cut down to bite-size morsels to appease the attention span of the 21st century! Regardless or because of it, the Concert and Chamber Halls are solidly booked for the first season. The facility administrator Lieben-Seutter smugly suggested that he’d be able to sell out the halls by programming an ensemble of “comb blowing janitors.” Such are the luxuries of having classical music of the past, present and future as part of the national DNA! Of course, Politicians and leaders of Industry are already lamenting the huge costs of the project, which will never fully pay for its existence. Maybe we should remind them of all the money wasted globally on hopeless and destructive projects? I don’t know about you, but I’d rather be looking at Elphie in full glow than at a golf course in the desert of Dubai or a stockpile of chemical and nuclear weapons!