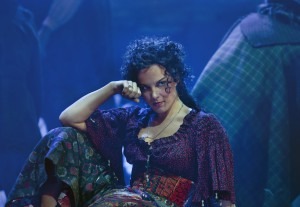 Mezzo-soprano Elīna Garanča’s appearance at the Guangzhou Opera House’s Five Year Anniversary concert marks her first appearance in Asia and she told us how excited she was to make this trip, particularly as she was looking forward to meeting China’s classical music audience in person.

Elīna Garanča comes from a musical family from Riga, Latvia; her father was a choral conductor and her mother a singer. She studied under her mother at the Latvian Academy of Music before continuing her studies in Vienna and the United States. Awards for her singing came early, including being a laureate of Finland’s 1999 Mirjam Helin Singing Competition. She won both Musical America’s “Vocalist of the Year” and MIDEM Classical’s “Singer of the Year” in 2010. In 2006, during a televised gala at the Semperoper Dresden, she was presented with the European Culture Prize. Her career seems to have been one triumph after another: celebrated roles include Annio in La clemenza di Tito, Cherubino in Le nozze di Figaro, Octavian in Der Rosenkavalier and Charlotte in Massenet’s Werther in Salzburg, Vienna, London, and Berlin In New York, her title role in Carmen with Robert Alagna was part of the Met Live in HD series.

We asked her about the filming of the Met Live in HD Carmen, and she took us through the last-minute changes that made that production so perfect. The stage director, Richard Eyre, had been working in cinema and theatre, and the cast knew from the first day of rehearsal that the production would be broadcast. After they created the “scratch tape,” which filmed the last performance before the live broadcast, Ms. Garanča went to the studio and worked with the TV director and the 12 camera men to heighten the filmed effects: she suggested that some positions be changed, and that the cameras could show more reactions and use different angles. They worked for 6 hours, going through whole opera. All that work paid off, she says, “as I have been told that this has been the best filmed HD performance from the Met.”

She spoke also about her feelings about the new trend towards filmed opera. She has two reactions: from one side, those programs reach countries and public which might never see a real opera and it gives her and opera a new international popularity. On the other hand, there’s nothing like actually attending live opera. The natural sound, vibrations, intonation from orchestra and voices that only life theatre creates when you sit in opera house and feel it on your own skin. She hopes that, if anything, the opera broadcasts give the audience the inspiration, at least once in their life, to take their cinema experience into a real opera house. 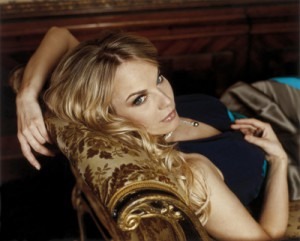 One of the pieces she will be singing is a duet from Donizetti’s Anna Bolena. Her role is that of Anna Bolena’s lady-in-waiting, Giovanna Seymour (Jane Seymour), who, as we now know, will replace Anne Boleyn as the next wife of Henry VIII. Ms. Garanča says that she loves “this opera and I love Giovanna Seymour. We know from the past, from what Enrique VIII has said, that Giovanna was his true and only love, who has been taken away from him by sudden death, so knowing this fact, this music is really full of love and passion to my ears.”

She will also be singing the beautiful duet “Flower Duet” (Duo des fleurs / Sous le dôme épais) from Lakmé with soprano Sumi Jo. When asked about the challenges in each singer maintaining their own character while also creating one of the most beautiful duets in opera, Ms. Garanča simply said that she loves singing duets and ensembles. Looking at the technical aspects, she said she loves “tuning together and matching voices, so I don’t really see it as a challenge rather as a beautiful experience.”

Upcoming projects for her involve going into a new part of the repertoire. She’s preparing to sing her first Santuzza (Mascagni’s Cavalleria Rusticana) at La Scala in June and she says it will be her first operatic role going towards the heavier verismo repertoire. She says she’s really very much looking forward to it. In addition, she will be performing several concerts over the summer and then will be performing Charlotte in Massenet’s Werther in Salzburg, then Anna Bolena in Met, Werther in Vienna, and La Favorita in Berlin.

Ms. Garanča comes from Latvia and we asked her about other singers from the Baltic region that we should be keeping a watch on and she mentioned Kristine Opolais, Aleksandrs Antonenko, Marina Rebecca, Inga Kalna, Maija Kovalevska, all of whom are performing in most important opera houses in the world, be it the Met, La Scala, Munich, London or Vienna. “All of them have beautiful voices and are very loved and sought after.”

We asked her about opera on recordings and if they were going to be replaced by opera on DVDs. She said that, in her view, “the interest in recordings, especially studio recordings, is dying.” The one aspect of opera recordings that was still interesting were live recordings.

We also asked about her spare time, always rare in an international career. She said that with two children, spare time was not really possible. “My life is either singing on stage or taking care of our kids.” When she’s learning a role, however, she does it while knitting, saying “it relaxes me and I memorize my texts like that.” In summer she has her green garden, “all fresh food – salads, tomatoes, onions, carrots etc., come from our green garden. I love to see how my children go to the strawberry plant and eat a fresh berry straight from the sunny garden, that makes me happy!”