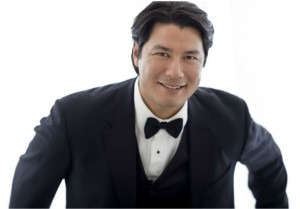 Mr. Diegel came to opera after a few years in the banking field and when we asked him about how this happened, he explained that he had been a practicing musician in high school (clarinet and sax) but, more than that, his father loved opera and classical music and his mother was a ballet dancer, so he grew up with opera in the house. He is a graduate of the University of Memphis, where he studied Philosophy and Theology, before doing his formal music training at Yale. For those with an “opera mind,” and who are willing to learn, opera is a viable choice. Learning from a good teacher is important, but actually performing is also a valuable learning tool. 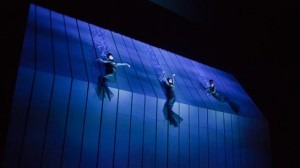 Mr. Diegel made his Metropolitan Opera debut in the Robert LePage production of Das Rheingold as Wotan’s son Froh. The problems with “The Machine” were legendary and we asked him both about the set and his costuming.
He laughed about “The Machine” and its unique problems, including the fact that it failed on opening night. He said that each performance offered its own challenges, including the nightly fear that The Machine wouldn’t actually work. When we asked him about his form-fitting armor, he said it wasn’t in itself uncomfortable, but it was made of a hard plastic that had a tendency to ride up and would rub his neck, resulting in one night with a cut. He found the whole process of being in the Met production very thrilling. 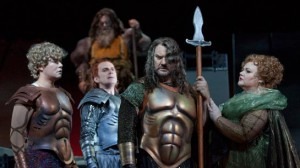 At the GOH, Mr. Diegel will be singing some of the most famous arias for tenor, including “Nessun dorma” from Turandot, “La donna è mobile” from Rigoletto, and “Vesti la giubba” from Pagliacci. We asked him about how he approached these warhorses of the tenor repertoire. He first spoke about how different it was to approach these works as concert arias and how, in most cases, it was much easier to approach them outside the context of the opera. For “Nessun dorma,” the key is pacing and how much a singer has to conserve his voice for that final phrase. Since these arias are very well-known and loved, he feels that his own contribution to these works comes from what he, as an actor can bring. “You have to bring your own ‘pain’ and heartfelt emotion into a role to make it believable. Everyone has had heartache and the more you bring into your performance the better your performance will be.” At the same time, you cannot judge the morality of the character you’re playing: even if he’s the villain, you have to be true to him.
He’s performed an enormous range of repertoire from Wagner to Puccini, but what he would like best would be to do more Verdi. He finds Verdi intricate and interesting to sing and holds Otello as a demanding and difficult role for his future.
Tosca: E lucevan le stele

In a conversation with Sir Charles Mackerras a few years ago, we were talking about the future of opera recordings; he thought that opera on disc would disappear and be replaced by opera on DVD. We asked Mr. Deigel his thoughts on that and he responded that there will always be a place for recordings, but with today’s media-savvy audience, opera needs video to be viable.
When we asked what he does with his spare time, he surprised us by saying that his escape from opera was found in golf. It challenges him in a way that singing cannot and has become almost therapeutic. With his 3 handicap, he quite regretted that he was unable to bring his clubs to China as he’d heard of all the beautiful golf courses. He spoke favorably of Guan Tianlang, who became the youngest player to make the cut in PGA Tour history when he played in the 2013 Masters at age 14.
Official Website