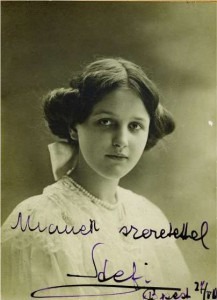 She had deep blue eyes and blonde hair that she wore in two small buns on either side of her head. Extraordinarily talented, Stefie Geyer started her musical training at age three and gave her first public violin recital at age seven. In due time, she became one of the most celebrated violinists of her generation. He was a slender and sickly pianist who had high dreams of becoming an internationally acclaimed artist. Plagued by poor health, Béla Bartók had turned down his acceptance at the prestigious Vienna Conservatory to study at the Budapest Conservatory instead. And it was there that he first met the girl he called the “14-year-old elfish little creature.” By 1905 Bartók was offered a job at his alma mater, which he happily accepted. By then Stefie had matured into an exceptionally beautiful young woman and an extraordinary artist, and over the violin and piano works of Max Reger, Béla fell head over heels in love with Stefi.

Béla Bartók: Violin Concerto No. 1, BB 48a
In the summer of 1907, Bartók was gathering folk songs in Transylvania. Concordantly, he began with the composition of a violin concerto representing a character portrait of his beloved. The first movement is an idealized portrait of Stefi describing a gentle and unassuming woman. In the second movement, Bartók places the emphasis on Stefi as the sparkling virtuoso violinist. He called it “cheerful, witty, and amusing.” After Bartók had completed the first two movements, he writes in his diary “Now, I should compose a picture of the indifferent, cool, silent Stefi Geyer. But this would be hateful music.” Apparently, Stefi had begun to withdraw from the relationship and Bartók wrote her a number of scathing letters. “You are a dear, a good, a fairy-like, an enchanting girl, who has only to draw a few lines to chase the dark, grimly swirling clouds from the sky and makes the bright sun shine on me. Yet, you are a taciturn, a bad, a cruel, a miserly girl to begrudge me your powers of enchantment!” In the end, Bartók never wrote the “hateful” final movement. 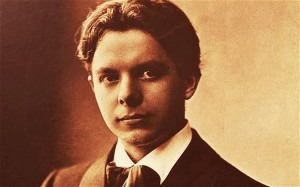 Through a series of long and passionate letters written during his time engaged in musical fieldwork, we get an immediate glimpse why the buddying relationship soured. Initially, his letters talk about musical matters and his experiments in the field, yet they quickly turn to matters of society, politics and eventually religion. “The middle class,” he writes, “which stands between the highest people and the peasant class, is, owing to its stupidity, actually unenjoyably. We like the childlike naivety of the peasants, which manifests itself in everything often with primitive strength; the intellectual strength of the highest people is impressive, but the idiocy of the middle class – including most of the ‘gentry’ – which lacks natural naivety, is insufferable.” Stefi, who actually came from a solid middle-class family—her father was a Budapest police constable—must not have taken kindly to Bartók’s frank words. But what really pushed the devout Catholic Stefi over the edge was Bartók’s view of religion. “That mystical mumbo-jumbo,” as he called it, “cannot be blamed on Jesus.” Bartók thought that the meaning of life was not directed towards immortality, but to “give a few people some minor pleasures. If I ever crossed myself, it would signify in the name of Nature, Art, and Science.” It probably did not help that Bartók signed the letter “Greetings from an Unbeliever, who is more honest than a great many believers.” Stefi’s response has not survived, but it certainly inspired another heated response. “Why are you such a very weak person, and why are you afraid of reading and learning?” At any rate, it was becoming rather obvious to both parties that the relationship would not work out in the long run.

On the very day Bartók finished the violin concerto, Stefi wrote him a letter stating that despite his intense passion for her, she would never consider marrying him. Bartók was devastated and replied, “I finished the score of the violin concerto on the 5th of February, the very day you were writing my death sentence… I locked it in my desk, I don’t know whether to destroy it or to keep it locked away until it is found after I die and the whole pile of papers, my declaration of love, your concerto, my best work are thrown out.” Bartók also started work on a string quartet, with “the first theme is the theme of the second movement twisted into a bitter song of death.” He mailed the manuscript of the concerto to Stefi, who kept it locked away among her papers; she never performed the work! As for Bartók, by 1909 he had married Márta Ziegler, the sixteen-year-old daughter of another Budapest police officer!