Artists Interviews
The Character of a Basso: An Interview with Riccardo Zanellato
by Maureen Buja April 30th, 2015 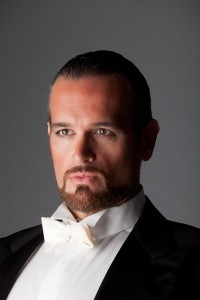 Italian basso Riccardo Zanellato will join Sumi Jo and Elīna Garanča in the Fifth Anniversary Gala of the Guangzhou Opera House in May. This isn’t his first appearance in the region, having sung in Hong Kong and Taipei in the Verdi Requiem. He has also sung at the Berlin Staatsoper, Opéra Bastille in Paris, and La Scala.

Verdi: Requiem: Dies irae: Mors stupebit (Riccardo Zanellato, bass; Parma Teatro Regio Orchestra; Yuri Temirkanov, Conductor)
His debut was in 1997 in Gounod’s Faust, where he took on the role of Méphistophélès. Now, he finds that his greater awareness and technique have given him a deeper view of the role, while still trying to maintain the same enthusiasm.

He cites his two teachers, Arrigo Pola and Bonaldo Giaiotti as fundamental to his career, as well as winning the A. Belli International Lyric Contest in Spoleto in 1996. These things enabled him to put his trust in his ability. Working with great conductors and directors was also important in the development of his career, specifically citing the conductors Bruno Bartoletti, Bruno Campanella, Roberto Abbado, Daniele Gatti, and Riccardo Muti, and directors Marco Catena, Graham Vick, Ugo de Ana, and PierFrancesco Maestrini.

When we asked about how he prepared for his basso roles, where the character could be either of the nobility or the bad guy, he said that “Each role I perform has a particular character. I try to deepen it by inserting it in its historical and social context, but mostly I try to detect and integrate the emotional state expressed by the author.”

The Gala closes with the magnificent quartet from Act III of Rigoletto, ‘Bella figlia dell’amore’ and we asked how he prepared these kind of Verdi ensembles where each character pursues a different course. In singing the role of Rigoletto, he sees that the characters have a thousand shades and he tries to show the feelings that his character lives and feels. In the case of Rigoletto, the character is that of a father mocked, cheated and cursed, and who was violated in his most important and precious love and affection. In his pain, he cries out for revenge. The psychological aspects have to come to the fore. 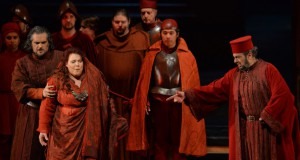 His inspiration as a singer is “the mythical Cesare Siepi” (1923-2010). He declared Siepi to be “Elegant, with an imposing physicality, perfect in diction and phrasing, and last but not least a gorgeous actor.”

Riccardo Zanellato’s first music degree was in guitar and we asked if this was something he got to use in opera. He said not yet, but found that studying the guitar was useful in guiding his path as a lyrical artist.

We asked about the ascendency of Opera DVDs over CDs and he was of two minds about them. On one hand, opera is a work of art combining music and acting, and on the other hand, so many recordings of great artists of the past in whom we find inspiration were audio recordings only. Sometimes it’s useful to just shut your eyes and listen.

For his spare time, he said with two sons he was kept quite busy and he appreciated having the time to watch them grow up. Other hobbies include cooking for people he loves and reading thriller and watching movies.