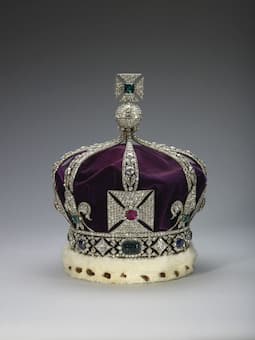 The Crown of India

George V, alongside Queen Mary, was crowned King of the United Kingdom, the British Dominions, and Emperor of India at Westminster Abbey on 22 June 1911. It had already been announced that the royal couple would travel to India to attend the Durbar, an Indian imperial style mass assembly organized by the British at Coronation Park in Delhi, in December of that year. The Emperor and Empress travelled throughout the sub-continent, with George V indulging in his passion of big game hunting in Nepal. Apparently he shot 21 tigers, 8 rhinoceroses and a bear over 10 days! The official ceremonies lasted from 7 to 16 December, with the Durbar held on 12 December. George V wore the newly created Imperial Crown of India; featuring eight arches containing 6,170 cut diamonds, all covered with sapphires, emeralds and rubies, with a velvet cap. Practically every ruling prince and nobleman in India, plus thousands of landed gentry and other persons of note, attended to pay obeisance to their sovereigns. 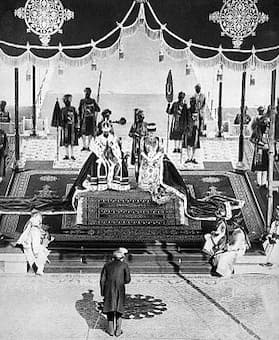 To celebrate the creation of the “Crown of India,” alongside the royal coronation visit to Delhi, an elaborate theatrical presentation was staged at the Coliseum Theatre in London on 11 March 1912. The masque—an essentially courtly entertainment that featured lavish architectural staging and sumptuous costumes—was divided into two tableaux, “The Cities of Ind” and “Ave Imperator.” With the libretto fashioned by Henry Hamilton, Sir Edward Elgar was commissioned to compose the music. In all, Elgar composed twelve pieces for contralto, bass, chorus and orchestra. He later extracted five of the pieces to create The Crown of India Suite. And that included a newly composed reflective “Interlude” for solo violin and orchestra. Originally issued in a piano/vocal version, the orchestral parts were somehow destroyed in the 1960s. Only in 2007 did the Elgar Society commission Anthony Payne to complete the orchestration of the music for The Crown of India.