Artists Behind the scenes
The Dangers of being a Musical Prodigy
Antonio Paganini: Musical Father from Hell
by Georg Predota September 10th, 2017
Tags: Paganini 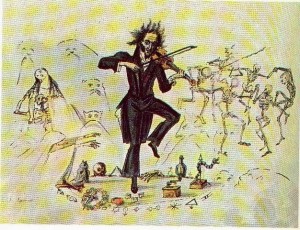 Niccolò Paganini left an irrefutable mark on the history of instrumental music and 19th century social life. Born in Genoa on 27 October 1782 he was the third of six children of Antonio and Teresa Paganini. Antonio Paganini was a dockworker and day laborer, managing to supplement his meager income by playing the mandolin. So he was absolutely delighted when young Niccolò displayed great musical talent at an early age. It was not his son’s musical talent that brought excitement to Antonio Paganini’s life, but the prospect of reaping substantial financial benefits from the boy’s musical talents. Antonio started Niccolò on the mandolin, but switched him to the violin at age 7. Giving musical instructions to this son was not a labor of love, as Niccolò later wrote. “My father Antonio soon recognized my natural talent and I have him to thank for teaching me the rudiments of the art. His principal passion kept him at home a great deal, trying by certain calculations and combinations to figure out lottery numbers from which he hoped to reap considerable gain. He therefore pondered over the matter a great deal and would not let me leave him, so that I had the violin in my hand from morn till night. It would be hard to conceive of a stricter father. If he didn’t think I was industrious enough, he compelled me to redouble my efforts by making me go without food so that I had to endure a great deal physically and my health began to give way.” 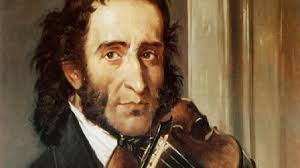 Being forced to practice the violin up to 15 hours a day hardly seems a recipe for a healthy childhood. Neither is withholding food and water as punishment for lack of enthusiasm. “I really didn’t require such harsh stimulus,” writes Niccolò “because I was enthusiastic about my instrument and studied it unceasingly in order to discover new and hitherto unsuspected effects that would astound people.” As the immediate result of his father’s abuse, Niccolò health became so scarred that he would never fully recover. He also developed a serious drinking problem by the age of 16! But even more troubling were the psychological effects. He became obsessed with fame and money, and his relentless ambition translated into increasingly bizarre behavior. Supposedly, he was once invited to play at a funeral, but interrupted the ceremony with a twenty-minute solo concerto. And I am sure you’ve heard the story of him spending eight days in jail for drugging his girlfriend and forcing the abortion of his child.