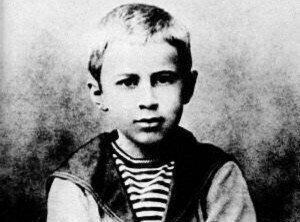 The other day I was looking through the earliest articles written for my blog. Some of my early writing is horribly self-conscious, and evidently written with little expectation of anyone actually reading it. But however much this “juvenilia” may make me cringe at its gaucheness, it still has value: reviewing it with the hindsight and maturity of nearly ten years writing experience, it serves as a record of the development of a distinct voice, and a reminder of my thinking style then in comparison to now.

For composers, early works and what might be dismissed as “juvenilia” serve a similar purpose. There’s a fascination in exploring early or youthful works: while the creator may not necessarily have intended these to be made public, here we may discover a composer’s early artistic personality and voice, and such material is a record of progression – from the more naïve or experimental phases to a fully-fledged mature, confident and established composer. Some composers revisit early works and revise them to create new works (Benjamin Britten is a notable example).

They were “learning” pieces, although at the time I thought some of them might have a chance and only now look back at them as “learning” pieces, realizing today the steps they represent in my growth as a composer.
– Julianna Hall, composer

Composers such as CPE Bach and Verdi, who were talented youngsters, are known to have destroyed early work; Grieg asked for his early work to be destroyed, but thankfully it was not; Prokofiev meanwhile kept his early work, highlighting its problems in his autobiography, perhaps recognizing the value of revisiting such work as a record of his earliest attempts at composition. Both Camille Saint-Saëns and Richard Strauss showed respect for their early work, and Saint-Saëns even went so far as to declare he could find no faults in it.

Bartok: Rhapsody Op. 1
Prokofiev: Piano Sonata Op. 1
‘Opus 1’ does not indicate the first ever piece written by the composer; nor does it necessarily indicate a work of juvenilia, but rather the first published work. These (usually early) works are revealing in that they all contain fascinating pre-echoes of the composers’ later music, as well as highlighting the diversity, originality, and future maturity of their creators. Bartok’s Rhapsody Opus 1, for example, is full of premonitions of his later works – bass drones, open fifths, folk melodies and dances – yet it also has a strong affinity with Liszt in its thunderous virtuosic passages, sweeping scale and masterful juxtaposition of the ethereal (in the opening Adagio) with the ominous in the boisterous and colourful second section. Similarly, Prokofiev’s Sonata No. 1, harks back to 19th-century Romanticism, and could easily be mistaken for a work by Glazunov (one of Prokofiev’s teachers). It also shows the influence of composers such as Tchaikovsky, Rachmaninov, Busoni, and, above all, Anton Rubinstein, a favourite composer of Prokofiev’s mother. Benjamin Britten revised some of his juvenilia (already recognized as music of high quality) to create new works, including his Simple Symphony (1933-4).