Composers Inspiration
Simple and Plain
by Maureen Buja May 29th, 2018 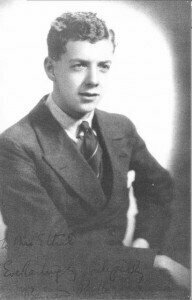 Benjamin Britten (1913-1976) started composing as a child and, unlike most children, kept careful track of his writings. His early works are the expected piano pieces and songs but also chamber and orchestral attempts. His first major work took those works and transformed them into something that has retained both its youthful outlook and yet is a work of considered accomplishment.

His Simple Symphony, Op. 4, of 1933, took melodies that he had written in 1923, when he was but nine, and, tempered with his studies at the Royal College of Music with John Ireland and private studies with Frank Bridge, evolved into a lovely string orchestra work. It could also be a chamber work, as performed by a string quartet.

The titles of the movements are not the typical sombre tempo indications, like Allegro, but instead are descriptive: a Boisterous Bourrée, a Playful Pizzicato, a Sentimental Sarabande, and a Frolicsome Finale. It is those titles that give us a clue to his intended audience of school children, both as performers and audience. The work received its premiere in 1934, with Britten conducting an amateur orchestra.

For each movement, he took a theme from two of his childhood works. The first movement, Boisterous Bourrée, is built on the second movement Bourrée of his first suite for piano (1925) and a melody from a song (1923) he had written to a text of Tennyson.

Britten: Simple Symphony, Op. 4: I. Boisterous Bourrée (Northern Sinfonia; Steuart Bedford, cond.)
As performed by a string quartet, we hear the interplay of the lines more clearly, particularly in the movement of the cello line.

Britten: Simple Symphony, Op. 4: I. Boisterous Bourrée (Maggini Quartet)
The second movement, one of the most famous from this work, is indeed a Playful Pizzicato. When played by the orchestra, it is a magnificent echo-y piece. For some listeners, the melody may sound familiar, as it incorporates the opening of the music from the long-running BBC agricultural radio program The Archers.

Britten: Simple Symphony, Op. 4: II. Playful Pizzicato (Northern Sinfonia; Steuart Bedford, cond.)
When played by the string quartet, however, it becomes much more shadow-y. The themes for this movement came from the Scherzo movement of his Op. 5 Piano Sonata (1924), and from a song (1924) to a text by Rudyard Kipling.

Britten: Simple Symphony, Op. 4: II. Playful Pizzicato (Maggini Quartet)
The Sentimental Sarabande of the third movement takes its theme from the Prelude of his Suite No. 3 for piano (1925), and from a piano waltz (1923).

Britten: Simple Symphony, Op. 4: III. Sentimental Sarabande (Northern Sinfonia; Steuart Bedford, cond.)
It is in the string quartet version that the players can address the emotion of the piece more directly.

Britten: Simple Symphony, Op. 4: III. Sentimental Sarabande (Maggini Quartet)
The final movement starts with a declaration we haven’t heard earlier and, although it’s called a Frolicsome Finale, it seems deeper than just frolicsome. The themes come from the Finale of his Piano Sonata No. 9 (1926), and a song (1925).

Britten: Simple Symphony, Op. 4: IV. Frolicsome Finale (Maggini Quartet)
This work was a very youthful production, and used music he’d written since he was a child, but at the same time, was pointing ahead what would be the consummate mastery of this master of English composition.