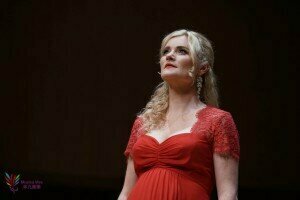 Soprano Samantha Crawford was recently a finalist at the Hong Kong International Operatic Singing Competition (HKIOSC) and spoke with us about the competition and her thoughts on the whole competition process.

The competition was held starting on 29 June 2018, with the finals on 2 July. Starting with 140 entrants, by the semifinals there were 24 singers and 10 in the final. Ms. Crawford noted that throughout the entire competition, it was truly international. For her, as a young professional, a competition like this, in a non-familiar location, was an opportunity to expand her networks of similar professionals around the world. In local competitions (such as in Europe or the UK), the faces can become quite familiar. With this competition in Asia, however, she could meet singers from all over the world and build relationships for future professional collaborations.

Another part of the competition that she appreciated was the simple fact that the final was videoed and semifinals were broadcast on Radio 4 RTHK. As she goes on in her career, this simple record gives her a powerful tool for her next roles and offers wider exposure to an audience beyond HK City Hall Concert Hall.

Dvořák – Song to the Moon from Rusalka

The work necessary for the competition involved choosing the works to be sung from a pre-picked list. For some singers, this meant presenting arias for the first time and expanding repertoire. The singers were limited in their choices by time: in that time a single long scene could be presented or 3 shorter arias. For Ms. Crawford, this meant at the semi-finals that she was presenting three different women on three different journeys. She sang Lisa’s canal scene from Tchaikovsky’s Pique Dame, Elsa’s vision scene (Einsam in trüben Tagen) from Wagner’s Lohengrin, and Leonora’s prayer for peace (Pace, pace mio Dio!) from Verdi’s powerful La Forza del Destino.

‘Einsam in trüben Tagen,’ from Lohengrin by Wagner

In addition to judging the competition, the three vocal judges, Dame Kiri Te Kanawa, Sumi Jo, and Dennis O’Neill held masterclasses. Ms. Crawford had been admitted to Dame Kiri Te Kanawa’s class, but when she made it to the final, had to withdraw to prepare her programme. Samantha was also grateful the jury took time to give feedback and input on repertoire and roles for the future. This advice can be vital in crafting a clear career path for young singers. Her final programme was Dvořák’s ode to the moon, ‘O Silver Moon,’ from Rusalka and the extended scene from Tchaikovsky’s Eugene Onegin where Tatyana writes to Onegin expressing her love.

As this competition was a first for Hong Kong, its future is unknown, but it is hoped by Mr. Lo Kingman, the organizers, and competitors alike that it is able to continue. For Ms. Crawford, this opportunity to see the talents in Asia was very welcome and she would like more opportunities for Asia to be a part of her future projects. The participation of an ever broader mix of nationalities makes opera better able to reach its true international audience. 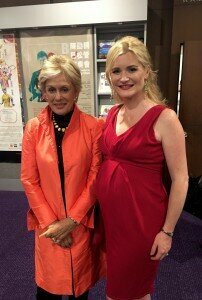 Since this operatic competition was a first effort for Hong Kong, we asked Ms. Crawford what she thought might be changed for the next competition. She thought that the repertoire might be expanded to include lighter forms such as operetta and to include more contemporary works. Instead of the long scenes, she would advocate the inclusion of ‘cut’ versions of those scenes, so that it would be possible to cover the repertoire but in a shorter time. Having to perform at least 2 arias would be a greater challenge to the competitors, given the change one has to make between two emotional scenes. One last change she would suggest would be dividing the award money from the singing contracts, as is done in other competitions. At the HKIOSC, the three award winners won both prize money and a contract for a role in a Musica Viva Hong Kong opera production or concert performance. Dividing the prize and contract awards would give the judges a way to reward other singers with potential.

She praised the orchestra and conductor Lio Kuokman for the finals – they brought the whole experience closer to a stage reality than performing with a piano alone. The video and live streaming also brought in a larger audience than might be expected, with 17,000 viewers on the Facebook Live Stream of the finals. 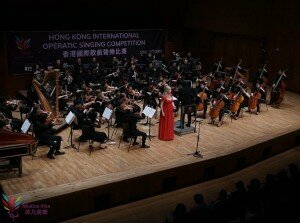 We asked about her spare time activities and she said that her holidays included scuba diving and a love of marine life, and her daily life includes swimming in London’s new Olympic pool. She enjoys the engagement between meeting new people and cultures, and, beyond music, finds museums, art galleries, dance and theatre to be sources of inspiration. She competed in Hong Kong while she was seven and a half months pregnant, so her spare time will be quite limited soon. However, after a short break, she looks forward to new Verdi and Wagner roles next year, and her return to Teatro Real Madrid for Der Ring des Nibelungen.

See Ms. Crawford’s website, for more audio and video samples of her work. The Musica Viva website gives more detail on this year’s HKIOSC competition and the repertoire.