Blog
The Dog Ate My Music — Excuses For Not Practicing
by Janet Horvath November 8th, 2014 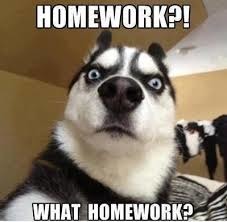 My parents were both musicians. My father set the standard for practicing. He would slavishly prepare his orchestral music week after week. I remember that he practiced Beethoven Symphony No. 8, which has a difficult triplet passage in the cello part in the Tempo di Menuetto movement. (It is often inaudible, covered by a gorgeous horn solo, but you can hear it at 3:07 in the link below.) He went over and over the passages with a metronome, starting ever so slowly, then inching the speed up. Both of my parents made sure I practiced properly. Music is more audible than homework so I couldn’t fake it. The piano was in our living room and while my mother, a quintessential piano teacher washed the dinner dishes, she’d listen critically. “COUNT! One–and–DA, Two–and–DA!” she’d bark. 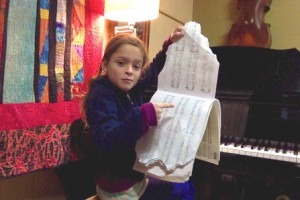 There was no escape when I practiced the cello downstairs either. The door had to be open so my father could intervene. He was from the old school and firmly believed in a methodical approach. “What? You play duets? Why aren’t you practicing your scales and etudes? Popper and Grützmacher.

One thing for sure—no matter how little I practiced there was no getting out of the lesson that week. They wisely understood that even if I had hardly practiced—according to their standard, at least an hour on each instrument every day— playing during the lesson was worthwhile.

The avoidance of practicing is ubiquitous. Students come up with excuses that are so creative they deserve repeating.

“I didn’t practice this week because I couldn’t be bothered.”
“My hands have grown since last week and so I keep hitting wrong notes!”
“Our housekeeper tidied up the music and I couldn’t find it anywhere.”
“I’ve been chewing gum all day and can’t hold the violin today.”
“It sounded much better in the practice room…”
“I sold my instrument to pay for music school.”
“I left my instrument in my other pants.”
“My cat vomited in the piano.” 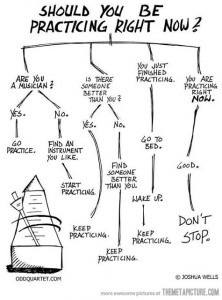 A friend of mine told me that a new student presented himself for their first lesson with a great excuse—a car ran over his bassoon. (Perhaps it sounded better?)

Another colleague told me about a trumpet student who fell onto his trumpet and crushed it while the teacher watched in horror!

Once one of my students, Clara, came to a lesson with the black, ebony fingerboard hanging, the strings dangling, and flaccid. Looking very sad Clara proffered her hand to show me four cello pegs. The strings must be wound through the pegs to hold the strings at the right pitch. On a blistering summer day she had left her cello in the car for several hours. When she went to retrieve her cello the fingerboard had come unglued, the bridge, which supports the strings, had toppled over, and the pegs had fallen out. “I didn’t know where to take it to have it fixed.”

Though we sometimes have our doubts, students are only human. To be honest, I’ve known several musicians who have left music, bows, endpins, and instruments on car rooftops. Hence Darren’s story: “After my last lesson I put my sheet music on the top of the car. Then I wrestled my cello into the backseat. My mom was in a hurry so I quickly hopped in. We drove off. I remembered the music when we were almost home! My mother was so annoyed. She turned around right away and we raced back to your street. I didn’t know my mom could drive so fast! Do you remember that it was such a windy day last week? Well the music was scattered all over the place. We found only this piece,” and then he showed me one page of his music. The page was covered with muddy tire tracks. 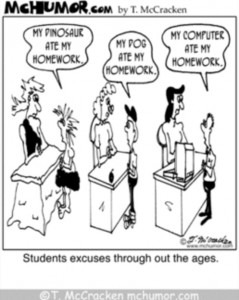 It’s important for parents to know that some of my best lessons were those for which I hadn’t practiced enough. Lessons were never cancelled. My music teacher used these lessons as an opportunity to practice with me, to isolate the difficult spots, to play slowly, to play hands separately (as in the case for piano lessons.) We would carefully analyze issues—

Nothing serves the student better for their future work in music or in any field than learning how to apply oneself and practice effectively. This intentional approach helps the student improve exponentially. Inconsistent practice prevents improvement, but poor, ineffective practice just reinforces mistakes!

Grutzmacher Etude No 21 played by Starker