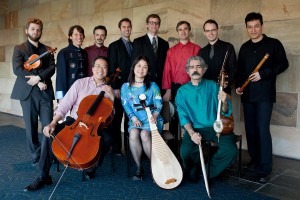 ‘It’s based around the basic instrumentation.’

‘What would that be?’

‘Mainly Western strings, percussion, plucked instruments, like my pipa, sometimes a Middle Eastern oud, or a guitar, and we have the Iranian kamancheh. Oh – and we have Indian tabla, and we took on a Spanish Galician bagpipe player two years ago. There’s also a Japanese flute, some Korean percussion…’

Only in the Silk Road Ensemble would this be considered ‘basic’. Pipa player Wu Man is a founding member of this multicultural melting pot, founded in 2000 as a shoot of the Silkroad Foundation which, in its own words, ‘seeks to create meaningful change at the intersection of the arts, education, and business.’

Headed by artistic director Yo-Yo Ma, the ensemble performs music created especially for them, showcasing and fusing instruments like Wu Man’s pipa with music from all over the world.

‘Before joining Silk Road I already played a lot of new commissions for the pipa. I was already going in that ‘crossover’ direction, so the Silk Road project really matched my goal. I wanted to work together with Yo-Yo to introduce these instruments to a wider audience.’

So how do they go about doing it? With no preexisting repertoire, the ensemble selects a composer, and goes from there.

‘After the piece is done we have a workshop, a session where we go through with the composer, and sometimes not every piece is successful – that’s just normal. Some pieces really stand out, and these we take on tour.

‘Others…need a bit more work! It’s all different. For my instrument, because most composers aren’t familiar with it, they write something but leave space for the individual player to create something. It’s the process which is exciting for me.’

Silk Road’s flexible creative approach makes it ideal for education. It holds an association with Harvard, where it works with the Harvard Business School in educational projects.

Wu Man recounts, ‘Music education is so important for today’s world. Sometimes artistic statements are much more direct, yet softer, than political ones, so especially younger generations should understand that there isn’t just one kind of music from one part of the planet.’ 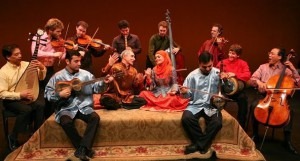 To say that Silk Road isn’t just from one part of the planet is an understatement. Despite its association with Harvard, this isn’t where rehearsals take place. Flying in people from around the world means that rehearsal spaces aren’t simply rare: they’re nonexistent.

‘The majority of our members don’t live near Harvard. We live in New York, California, some overseas. We don’t have a rehearsal space. For our upcoming Asia tour, we’ll arrive in Korea two days early, and rehearse there.

‘Where do we meet? We meet at the airport!’

You won’t find a more nomadic ensemble than Silk Road. From the instruments used, right down to the people who play them and the places they meet and rehearse, everything about it is a sublime cross-cultural fusion.

In Korea, where the ensemble will rehearse for the first time two days before its concert, Wu Man’s pipa will easily be drowned out by percussionists, so amplification is used.

‘And when the bagpipes come in… nobody can hear anything!’ she laughs. Nice to know some things stay the same wherever you are…