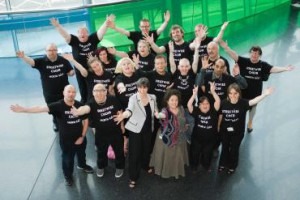 Amongst the wealth of operatic activity in the UK today (as surveyed recently on Interlude), the work of Streetwise Opera stands out as some of the most important. Founded in 2000, they have worked with London’s homeless on a number of remarkable projects. A recent culmination came at the Royal Opera House, Covent Garden, where members of Streetwise Opera formed the chorus for a production of Poulenc’s Dialogue de Carmelites, directed by Robert Carsen and conducted by Sir Simon Rattle.

In the first of a new series of features on musical organisations that make music with non-musicians, I spoke to the founder of Streetwise Opera, Matt Peacock, and began by asking him about the organisation’s beginnings.

‘In the 1990s I was working as an opera journalist’ he said, ‘and became interested in homelessness and the different ideas people have about the best ways of dealing with the problem. I volunteered an evening a week for The Passage night shelter in London, and after a while became a part-time support worker. Then, in about 2000, an article was published about a politician who said that the homeless are ‘the people you step over coming out of the Royal Opera House’, and we decided that it was a real opportunity; to put on an opera with homeless people would challenge and change the public perception of homeless people, and turn that stigma into a celebration of what homeless people could achieve.’ 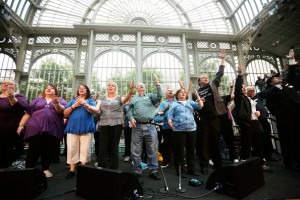 And what was the result of this first performance? ‘Through that process, not only were perceptions of homeless people changed, but when the performers themselves took the applause at the end, it was the first time they had ever really been congratulated for anything, and they were very eager for more. It became clear that the process of working on something like this was incredibly elevating, and changed fundamentally how homeless people regarded themselves. So this became the clear aim – to use music to help people move forward in their lives in different ways. From this work comes tangible benefit, especially increased self-esteem and confidence, and it might help these people take the next step, like picking up the phone to a long-lost relative or joining an employment programme, or just dealing with their problems more easily.’

Peacock talks with great passion and purpose, but unlike many discussing the homelessness issue (including many politicians), he is calm and practical, without resorting to hyperbole or patronisation. I asked him whether the work of Streetwise Opera has changed in its 13 years so far.

‘Well, we’ve grown from that first project in London,’ he said, ‘and now we run weekly programmes in ten different centres across England and Wales. We also have a growing international programme, with work in Japan, American and in Australia, and are looking at the possibility of projects in Brazil as well. What also happened in that time is that the arts have become much more respected and valued as a tool for social change. It’s still difficult to measure effectively, because sometimes it’s quite intangible as to what the arts actually do to people. But it can clearly make people grow, can make them feel very differently about themselves – and that can lead on to a variety of impacts.’ 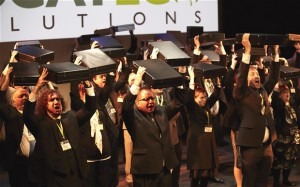 And what about long-term benefits? ‘What we’ve done also is try to tighten up our understanding of these effects, and also the progression from these projects to the rest of their lives. Most people can see how much it means to our performers to be on stage, but the question is – so what? What does this actually do? And though you can explain the short-term change, it’s also important that we ask ourselves the same question. So we now have a range of progression schemes, such work placements in arts organisations, and schemes to give people more access to community life once they are no longer homeless. If you like, our work has become deeper, taking people not just onto a stage but through the whole journey.’

We ended by discussing the future for Streetwise Opera, both in the next few years and more long-term. ‘We have a number of exciting projects for the next few years being announced in September’, said Peacock. ‘But more widely, our vision is for a world where the arts play a fundamental and well-understood role in supporting homeless people. We also hope that all these initiatives with the arts are being used to help symptoms and causes in social and medical welfare, such as in medicine or the criminal justice system, becomes a fundamental part of the way that we support each other.’

In a musical climate where seemingly every orchestra, ensemble or opera house is almost obliged by funding bodies to sustain an education programme, it is sometimes difficult to look beyond box-ticking to assess the true impact of that work. Streetwise Opera surely places beyond reasonable doubt the very real effect of that reaching out to all members of one’s community, and the power of the arts to create genuine positive change in our world.