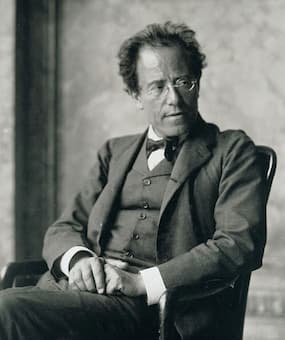 If Mahler could write a scary movie soundtrack, his symphonic poem Totenfeier (Funeral Rites) would be one of his contributions. This 1888 work, which one writer described as a ‘huge symphonic funeral march,’ comes between his first two symphonies. If his first symphony, Titan (1888), which came complete with an explanatory program was much in the Wagnerian mold, his second symphony, Resurrection (1894), took him in new directions. Sitting between these works is Totenfeier. Eventually to become the first movement of his Second Symphony, it had a brief life as an independent work.

In 1891, Mahler was appointed as chief conductor at the Stadt theater Hamburg. In Hamburg, he met the conductor Hans von Bülow, then director of the subscription concerts in Hamburg. Mahler impressed von Bülow with his abilities, but when he heard Mahler play Totenfeier for him on the piano, he didn’t like it and told him that ‘Totenfeier made Tristan und Isolde sound to him like a Haydn symphony.’ Mahler started working on the piece intending it to be a movement of a symphony but then presented it as a stand-alone symphonic poem on its own.

Totenfeier opens with a shivering of strings, followed by an expressive melody and this contrast continues through the work: the harsh sounds and rough rhythms that form the march theme are contrasted by the gentler melody in the major key. We can characterize these as a kind of dark pessimism and a faltering or tentative optimism, that come back again and again through tempo changes, key changes, and the timbre and texture changes that follow. In the end, though, it is Death that is triumphant as the work ends with a symbolic falling scale before a hush falls.


The symphonic poem was later recast as the first movement of his second symphony, where it is largely unchanged but seems to have a greater authority as a symphony movement.


The Resurrection Symphony was one of Mahler’s most popular works, and that the initial Totenfeier lives on there shows how Mahler recast this work until it finally found its place, finally, as the first movement in his new symphonic style.