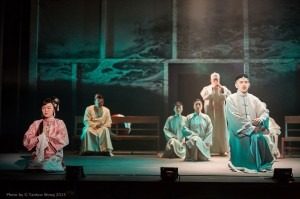 This summer, as part of the Hong Kong Music Series in London, the European première of the chamber opera “Datong: The Chinese Utopia” will take place on 27 and 28 July at the Richmond Theatre. Presented by the Hong Kong Arts Development Council and produced by the Hong Kong Arts Festival, this work explores the Chinese scholar Kang Youwei’s life and ideal for a utopia. Composed by Chan Hing Yan and directed by Tang Shu Wing, this production showcases an excellent line-up of musicians including singers Louise Kwong, Apollo Wong, Carol Lin, and David Quah, accompanied by members of the Hong Kong New Music Ensemble conducted by Liu Kuokman.

We spoke to renowned stage director, theatre educator and actor Tang Shu Wing about the theatre scene in Hong Kong, working with musicians and this chamber opera. Mr Tang is the Artistic Director of Tang Shu-wing Theatre Studio and the Head of Programme of the first physical theatre training programme in Hong Kong, having been the former Dean of the School of Drama of the Hong Kong Academy for Performing Arts. Mr Tang received his acting training at l’Ecole de la Belle de Mai and his Maîtrise Diplôme in Theatre Studies from the Université de la Sorbonne Nouvelle in Paris. 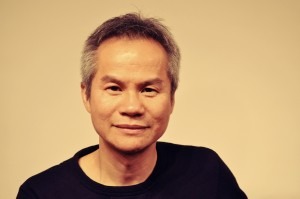 You studied law before turning to theatre and acting. What inspired you to switch to drama?

When I was studying at university, I had already been very interested in theatre and acting, but unfortunately the Hong Kong Academy for Performing Arts did not exist back then [for me to explore this field]. After working for a few years, I took some time off and enrolled in a few acting courses, which inspired me to train professionally in France and then to pursue it as a career.

Why did you choose to study in France?

I had some friends who were studying there already, and they told me that if I was looking for training in acting and theatre, it was a good place to do it. Moreover, I really liked the environment and cultural atmosphere there.

What do you feel are the main differences in directing and staging an opera versus a play? In what ways is working with musicians different from working with actors?

The main difference is that music is the parameter that dictates everything in an opera, from the way the libretto is written, to the duration of each scene and each act. Therefore the director has to really pay attention to this factor as we cannot edit or rewrite the music of an opera [to accommodate other factors]. Timing has to be very accurate. We, as directors, without changing the music or the timing of anything, have to help the singers express the right mood and to build a set that renders the atmosphere more alive. It is important for singers to attend some acting workshops to learn how they can express themselves better, for example using small gestures or how to convincingly emote through their singing. In this instance, I am hoping to inspire musicians to think about how to express different moods more vividly and how staging can make a big impact in conveying messages. 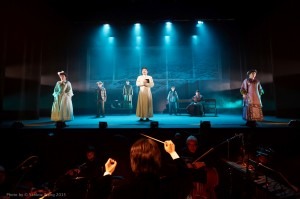 How has the theatre scene in Hong Kong evolved over the past one or two decades? Is there enough financial support to help develop a thriving theatre scene?

Actually, there are many more drama productions in Hong Kong now, encompassing all sorts of genres, and the standard has come a long way, compared to when I was at university.

The government actually provides a good amount of financial support to this industry, and as far as education goes, students from a young age receive a lot more exposure to drama production and theatre now compared to many years ago, not to mention the tertiary institutions that have been established to provide professional training in this field. In fact, there is a significant number of people who choose to pursue this as a career.

However, there is a structural problem here. In order for Hong Kong to become a world-class hub for drama, we need proper venues, not multi-purpose theatres or halls but specific spaces designed for plays only. And each theatre needs an artistic director who is then responsible for creating a vision for that specific venue, which is the practice in other countries.

How involved were you in the creation of this opera?

I was the last one to be involved. This opera was based on Evans Chan’s film ‘Datong: The Great Society’ – the Hong Kong Arts Festival commissioned it as a chamber opera with the original script adapted to become the libretto, and then composer Chan Hing Yan wrote the music for it. 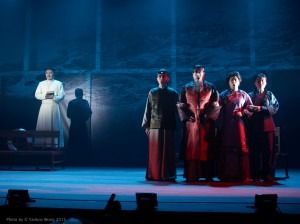 Datong is an opera in three acts – are the three acts told from the same perspective?

All three acts are told from the perspective of Kang Tongbi, the scholar Kang Youwei’s daughter… They are about the events surrounding her. This work is told from quite a strong feminist viewpoint!

Will this performance of Datong in London be different in any way compared to the performances here in Hong Kong?

Because of the differences in the layout of the actual stage, we have changed the set slightly to accommodate.

What do you think will attract the London audience to come to an opera based on a fairly unknown Chinese scholar, and would you expect them to have some knowledge of Chinese history?

Of course, the more they know the better, but we cannot expect them to. In London, where opera is so commonplace in the cultural life of the city, I am hoping that this opera, whether it be the subject matter, form, or the technique of singing in Mandarin in a western musical style, can bring new perspectives to the audience and allow them to learn what it was like [in China then].

As the opera unfolds, is there any sense of progress towards Kang Youwei’s Chinese utopia?

Not exactly in the opera itself, but it should leave room for the audience to imagine the ideals for this Chinese utopia and how they might translate to the current political climate.