In Tune Society
Listening to the Past without A Record Player
by Maureen Buja July 12th, 2017 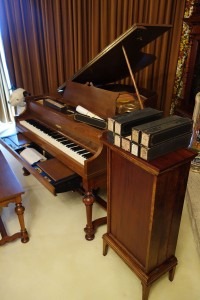 Before the advent of the phonograph in 1877, it wasn’t possible for people to play sound that had been recorded. The phonograph (a portmanteau word created from two Greek roots: (phone, “sound” or “voice” and graphē, “writing”) was preceded by devices such as the 1857 ‘phonautograph’ and the ‘paleophone.’ Unlike Edison’s 1877 invention, which could both record and play, these earlier machines were designed simply to create visual representations of sound. Recordings made on the phonautograph were not actually playable until 2008 when optical scanning and computer processing made the visible audible. A number of realized phonautograms can be heard at: https://www.firstsounds.org/sounds/scott.php .

Yet, before all these experiments in the late 19th century, and the eventual success of the phonograph in the 1920s, there were music recording and producing machines starting at least a century earlier. Now, however, we have to think inside a box.

The music box makes music by a set of pins that pluck a set of metal teeth – simple ones could play single melodies and the more complex ones would encode multiple songs to be played in sequence. In this music box performance of Mendelssohn and Verdi, we hear the distinctive tinkle of the metal keys. 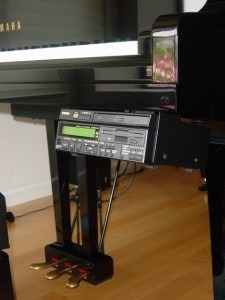 But the musical box was a construction – no real musical ability was needed on the part of the ‘programmer.’ If you wanted to hear real music, you still had to go to a concert. Until the advent of the player piano, it wasn’t possible to do things such as alter the speed or the dynamics -once the mechanism started, it wasn’t really possible to make such delicate adjustments.

The player piano used a paper roll to capture the music created when the artist pressed a key on the piano. The very first player pianos tried to use the paper roll that would have had to have been as wide as the piano itself to drive the piano strings. One of the early developments was to use a pneumatic device to read the paper and active the strings, thus making it possible to use a piano roll smaller than the width of the piano!

The Pianola was one of the first widely available player pianos – by 1903, the Aeolian Company listed more than 9,000 titles for the player. The majority of the piano rolls were of light, classical, or religious music, giving us a clue as to the intended market. Some ragtime works were recorded, but it was the rich middle-class who was going to buy this expensive instrument. Early instruments used a limited 65-note keyboard, but the great success went to the developers of the normal 88-key player piano.

In Germany, an inventor created a player that could record all aspects of a performance exactly so that when you put it on your player piano at home, it was as though the artist was there in person. The Welte-Mignon device, launched in 1904, had recordings by the leading performers of the day.

Many top pianists and composers recorded Amipco rolls, including Moriz Rosenthal, Olga Samaroff, Sergey Rachmaninoff, Josef Lhevinne, and Benno Moiseiwitsch. Here is a recording by the composer and pianist Ernesto Lecuona of a movement of his Andalucia Suite. His dynamic changes, his tempo changes, and his own interpretation of his music comes through clearly.

Lecuona: Andalucia, “Suite espagnola”: VI. Malagueña (Ernesto Lecuona, Ampico Player Piano)
The Duo-Art system also had its list of distinguished performers, including Paderewski, Josef Hofmann, Percy Grainger, Teresa Carreño, Aurelio Giorni, Robert Armbruster and Vladimir Horowitz. In the Duo-Art system, the pianist played and the keys of the piano also operated a perforation machine to make the piano roll. Because the machine couldn’t preserve the dynamics that the performer used, a second hand, that of the recording technician, added the dynamics onto the roll. This double process was then reviewed by the pianist and the technician before release.

When you have a performer such as Ignaz Friedman, who died in the early 20th century, but who made Duo-Art recordings, it is possible to hear him without the distracting snap and crackle of the early recordings.

Compared with a recording made in 1936:

Piano-roll technology was important in the first third of the 20th century before the perfection of the phonograph and the international monetary crisis of 1929 started the decline in piano sales. The Ampico company closed in 1941 but player pianos have never really gone away. There are now digital versions made by Yamaha, such as the Disklavier.

If you don’t have the technical skills to sound like the great pianists, this is the technology for you!