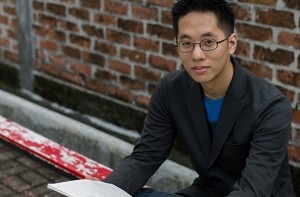 Classical composer Fung Lam and jazz guitarist Teriver Cheung teamed up with architect Anthony Lai to give us Hong Kong Episodes. The original 12-episode version received its premiere in Hong Kong in October 2015. With the 12 episodes, each could cover 2 hours of a 24-hour day. Now, taking Hong Kong Episodes on tour, they’ve compressed the day into 8-episodes.

Through the day, the composers have tried to be less depicting the actions of the city and more of the mood of the city and its aspects: nature, technology, tradition and heritage, and spiritual. The combination of the music and the visuals of the city have always been done placing the music first.

We spoke with Fung Lam before he was going off to London to present Hong Kong Episodes on July 7-8 in Whitechapel’s Wilton’s Music Hall, as part of a month-long set of performances of the 20th anniversary activities taking place in London. The ensemble, the Hong Kong Contemporary Group, has been created for Mr. Lam’s classical side of the program. The jazz ensemble, led by composer – guitarist Teriver Cheung, has its own part to play.

In his music, Mr. Lam has sought to create a sense of timelessness, consciously seeking to create music that doesn’t have an essential sense of ‘Chinese-ness.’ Where many composers try to use folk songs to evoke a sense of place, Mr. Lam has avoided that. He did note that one Buddhist melody did creep in, but that was a deliberate use so he could better evoke Buddhist culture. He feels that the interaction and intersection of classical music and jazz, and the images will give listeners the ability to break out of their preconceptions of Hong Kong, Hong Kong music, and the city itself.

The 8-episode version has just been on tour through 5 cities in China before going to London. Following London, the tour continues onto Shanghai and other parts of China before ending up in Taiwan in November.