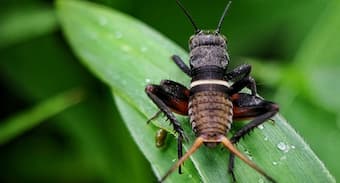 The repetitive click of the cricket is a sound for a summer night. They are all over the world with the greatest variety of them being in the tropics. They appear in literature and movies, such as The Cricket in Times Square, or Jiminy Cricket in Pinocchio. Composers take advantage of their rhythmic qualities to imbed them in music.


Josquin des Prez’ 15th-century song in praise of the cricket, El grillo, turns from praise of the insect into a love song: the cricket is praised for being a good singer who sings for a long time, all the time, however, if the month of May is warm, he sings out of love.


In 2002, American composer Charles Wuorinen took 6 secular works by Josquin for 3, 4 and 5 voices, rewriting them for string quartet. The final movement is his version of Josquin’s cricket song.


Moroccan-French composer Graciane Finzi took 6 anonymous haikus translated into French and set them for voice, flute and strings as her 1999 song cycle, La lune à la fenêtre. The second haiku is about the bride of the cricket.


Elena Ruehr’s 1996 work Cricket, Spider, Bee takes from poems by Emily Dickinson. The Crickets sang (Dickinson’s original title for the poem) is set in a village at the end of the day. Workers return home, twilight arrives and becomes night, but it’s the crickets that signal the end of the day. In Ruehr’s setting, the harmony builds and moves between dissonance and consonance.


Gerald Levinson’s 2009 work, Crickets, takes it inspiration from what the composer hears as ‘the overlapping Morse-code-like rhythms of late-summer crickets.’ This piano quintet uses the percussion of the piano and the string harmonics to create a seemingly dangerous insect world. 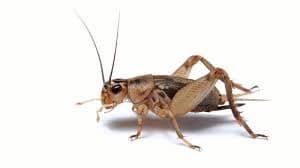 Mieczysław Weinberg (1919-1996) was born in Poland and then took shelter in the Soviet Union after the German invasion of Poland in 1939. He studied in Minsk before he moved to Moscow with the help of Shostakovich. His ballet The Golden Key, Op. 55, was composed in 1954-55 and in 1964, Weinberg created four suites from the ballet for concert use. The brief Dance of the Cricket moves phrases between the woodwinds, the strings, and then the brass.


We close with a miniature by Nino Rota. Better known for his film scores for Fellini and Visconti, he also wrote the music for two of Franco Zeffirelli’s Shakespeare films, and for Francis Ford Coppola’s first two films in his Godfather trilogy. In his other writing, he wrote a piece about the Cricket in the Night, where we hear a lonely little chirp echoing through the dark. The left hand is the night, while the right hand is the intermittently sounding cricket.


The sound of the cricket can be comforting, or, if it seems unceasing, truly annoying. Each of these composers took the idea of the cricket and its sound in very different ways.