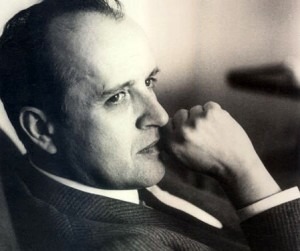 Italian composer Nino Rota wrote several operas, ballets and concerti, but he is best known for his cinema soundtrack work. Indeed, from the 1940s until his death, in 1979, there seem to be few great Italian films he did not write the score for. Il Gattopardo, Amarcord, Roma, Zeffirelli’s Romeo and Juliet… his CV is endless. But it was with director Federico Fellini that he took the link between cinema and music to the highest level. From Dolce Vita to 8 ½, Rota’s music played a key role in Fellini’s films (in the case of 8 ½, in fact, it is arguably the film’s main cohesive factor). And nowhere else was the music itself as much a character as in their last collaboration; Orchestra Rehearsal (Prova d’Orchestra: 1979).

The plot of the film is simple, and it all takes place in the same setting; the interior of a medieval church-turned-auditorium, where an orchestra assembles to rehearse. The musicians arrive, present themselves; their union representative (this is Italy in 1978) arrives and tells them a TV crew is filming them for a documentary; the conductor arrives and, very sternly, conducts a first rehearsal.


Tension grows around the room in this first part, as the musicians, already angry at not being paid by the TV company, become more and more frustrated at the conductor’s autocratic and condescending style. The first rehearsal is a disaster. The conductor treats the musicians like schoolchildren. When eventually they take a break, we get a peek at the relations between the musicians: we see the conductor sipping on champagne and lamenting the decline of great conductors; we see the copyist wander around lamenting the lack of integration between the conductor and the musicians; and, when the camera goes back into the auditorium, we see what the musicians were up to – they have staged a mini-revolution, deposed the conductor and created anarchy in the church. Chaos, violence and destruction. The noise grow louder; instruments get broken; people get shot. The confusion reaches its apex and is then suddenly broken when a wrecking ball demolishes one of the church walls and, as at a divine sign, the violence ceases, the noise decreases and the musicians stop, stunned. At this point, the conductor takes his baton again and they rehearse together. This time, in the midst of debris and the dust, the orchestra plays in perfect harmony.

This is a wonderfully poetic film which raises many questions and interpretations (and I have not ruined it by telling you the end: the film itself is far beyond my story-telling skills). Musicians, psychologists, sociologists and philosophers will all have an analysis. But there are a few notable points related to the themes I have recently discussed on the creation of art and repetition which are worth discussing.

Firstly, the structure of the film itself is musical: first, the instruments present themselves; then one theme is developed, then another rises in opposition; then a finale after the wall-breaking climax. This is music made into film: Fellini’s own symphony.

The main conflict in the symphony is the conductor-musicians opposition, and it is fascinating to hear what the two sides have to say about it each other. It begs the question of whether an orchestra can play without a conductor. That supreme harmony created when there is the right mixture of cooperation and friction between the two is a very fine line, and the film illustrates this well (on the other extreme, we have that old, delicious – if probably apocryphal – story about the millionaire music-lover who buys himself the right to conduct a concert with the Vienna Philharmonic: during the rehearsal, he kept interrupting the musicians to correct them, until at one point the first violin pulls him to the side and says “Stop interrupting us or we’ll play what you are telling us to play”).

The other point of interest here is the exploration between technique, evidenced in the conductor’s obsessive nature, and creative inspiration, reflected in the musician’s joie de vivre (and darkly, in the coup they stage). The former, I suggested a few weeks ago, treats art as a craft. It relates to having an idea in the back of our minds which we want to emulate: Kierkegaard’s Recollection. The latter is the creative side; art-as-idea. Repetition as repetition and as Repetition. In Orchestra Rehearsal, Fellini and Rota are very much able to show us how music and film can explore this dialogue.