To the outsider, the conductor looks as though he holds the oddest position in the orchestra – he may be the focus of the audience’s attention, but the orchestra barely seems to look at him. He turns his back to the audience and moves and gestures and sometimes even dances to the orchestra. There are few performers who are destined to be only seen from their least emotive direction and then there are conductors.

Conductors’ extravagant gestures have made them the focus of artists and, in particular, of caricaturists.

As a composer, Hector Berlioz was known as master of orchestration. But what did it mean to conduct one of his works? The French caricaturist Grandville (J.I.I. Gérard) chose to show him leading an orchestra of cannons with drums being struck by hammers, with the audience holding their ears and falling out of their seats. The picture, entitled “Un concert à mitraille et Berlioz” [A concert of cannons and Berlioz], also has the subtitle of “Heureusement la salle est solide… elle résiste !” [Fortunately the hall is solid… it can stand the strain!]. 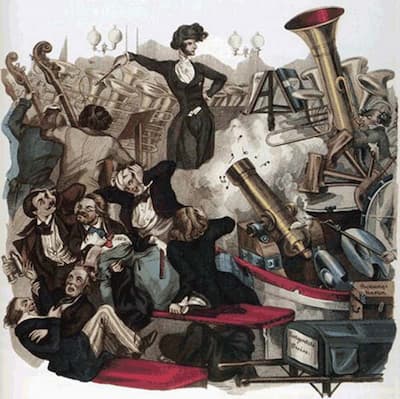 
In 1860, in a Wagner caricature by Cham, the orchestra seems to be made completely of babies. Is Wagner towering over them with his genius or was his music viewed as something for children? It’s really a joke on his ‘Music of the Future’ and who is qualified to play it: only musicians of the future. 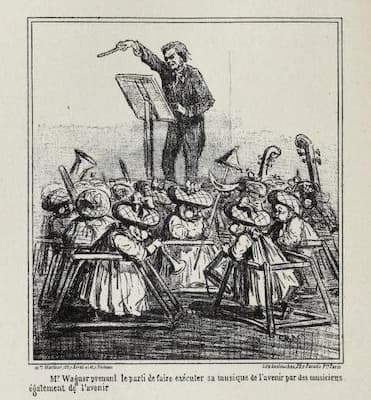 
Other caricatures by Cham in Le Charivani show audience members strapped into their seats so that they’ll stay for a full Wagner opera, and audience members needing ear trumpets after attending a performance of Tannhauser in 1861.

In The London Figaro of 1876, we have a Wagner caricature by Faustin, where, as the title tells us, he’s ‘conducting up a storm.’ When you look at it in detail, you see the audience running away behind him, and at his feet falls a critic, stabbed by a fatal eighth note. 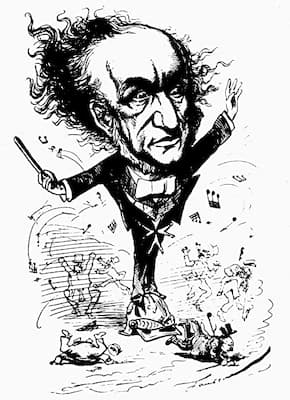 Another conductor who captured the artists’ eye was Gustav Mahler. In this series of caricatures by Hans Schließmann, his conducting style was captured from both the audience’s and the performers’ perspective. 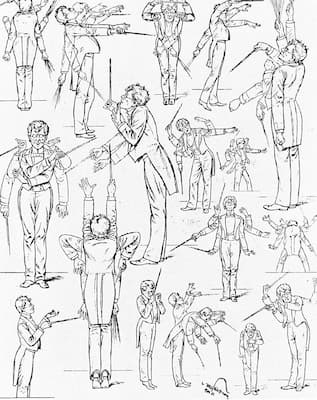 
In ‘The Modern Orchestra’ from 1907, Mahler, sitting on bomb, conducts with a rattle, while Schoenberg works at a sewing machine and Richard Strauss drops a heavy weight on the public, Arnold Rose (Mahler’s brother-in-law) plays a double violin with two bows. In the orchestra, we have singing cows, a pig having its tail pulled by a cat, an elephant trumpeting as its being played like a tuba and regular humans dwarfed by the double bass and the harp. In the back we have the inevitable cannon. There’s an anvil player and on the left side, dancing Indians. 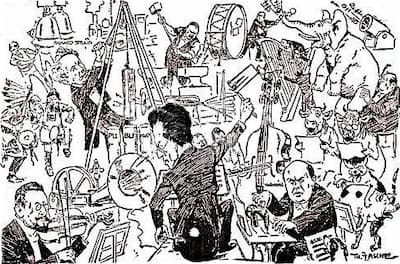 The next time you attend a concert think about how you might depict your conductor in action – is it all flying coat tails, wild hair, extravagant gestures or something quieter? We can trust Loony Tunes, however, to show us the true power of the conductor. 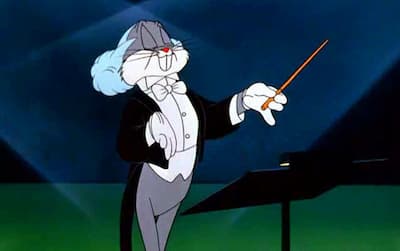