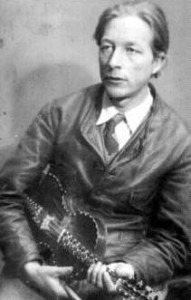 Eivind Groven and his fiddle

Norwegian composer Eivind Groven (1901-1977) came from the province of Telemark and his love for the province drove his artistic sensibilities. He was a self-taught composer, was a performer on the willow flute, and was a legendary fiddler. He collected more than a thousand folk-tunes and his own works have entered the standard repertoire of modern Norwegian music. This brought him to a puzzle: how does he reconcile the sounds and sonorities of folk music, which sometimes uses its own tuning systems, and the perfect temperament of Western art music? Groven’s solution was to carefully chord his music and remove, rather than add, notes that would have changed the folk tuning systems.

And so, when we listen to Groven’s first large-scale work, his first symphony subtitled, Toward the Mountains, we’re hearing a different compositional world. The work was first written for a competition given by the Norwegian Broadcasting Corporation for symphonic music. He first completed it in 1938 and finished it again in 1951. His composition took second place and wasn’t performed until 10 years later in New York.

When we think of the music of 1938, we have Barber’s Adagio for Strings, Copland’s An Outdoor Overture, Shostakovich’s Suite for Jazz Orchestra, Stravinsky’s Dumbarton Oaks Concerto. We don’t have music based on odd tuning systems, we don’t have music with slow movements that open with tuba solos, and we don’t have any work remotely like Groven’s.

The first movement, Andante quasi cantabile, lets us know from the beginning that we’re not in the usual symphonic world – the open chords under the trumpet, the trumpet line itself – all move us elsewhere. The whole feeling of the movement is that of a quiet exploration – hesitant steps in the strings, slow motions in the winds, all moving to a climax that doesn’t quite come. It’s an oddly restful movement, for a first movement!

Groven: Symphony No. 1, Op. 26, Towards the Mountains: I. Andante quasi cantabile (Stavanger Symphony Orchestra; Roland Straumer, cond.)
The second movement Allegro still doesn’t move the way we expect it – it’s dance-like, yet with martial-like interjections from the brass.

II. Allegro
The tuba solo starting this movement is unexpected, to say the least. When we hear the tuba outside its general lower bass grumblings, it most usually appears buried with a few solo notes in the middle of a movement, not taking the lead position.

III. Largo
The final movement gives us the heroic start we’ve been looking for since the first movement. Yet, when you listen to that brass line, you can start to appreciate the different view that Groven took towards tuning in the symphonic world: it’s all as usual, but his pitch choices make us hear these lines as coming from a different tradition. The melodies seem to wander, but they don’t go where we are expecting.

IV. Allegro ma non troppo
In Groven, we have a more symphonic juxtaposition of folk and western than we’ve seen in other composers, even considering the mastery of composers such as Bartók and Kodály. It’s curiously satisfying, while, at the same time, piquing our interest for other flavours.