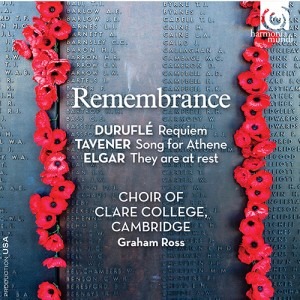 Graham Ross directs the Choir of Clare College, Cambridge in a wide-ranging and moving sequence of music for Remembrance, including John Tavener’s Song for Athene, settings of the text When David heard by two of England’s foremost 16th-century composers, Thomas Tomkins and Thomas Weelkes, and featuring Durufle’s 1948 setting of the Requiem Mass. “The singing and, above all, direction are of such consummate musicianship” (GRAMOPHONE).