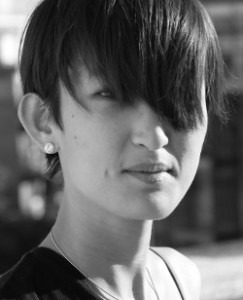 “I thought if I could play my own work, nobody would know if I played the wrong notes or wrong rhythms.” This was what composer and pianist A-Mao Wang thought, when at the age of 10, her father asked her if she would like to learn to compose music. She gladly said yes, and her career in music has taken off since then. Currently a third-year D.M.A. student at the UMKC Conservatory of Music and Dance, Wang won the Young Composers Project held by the Beijing Modern Music Festival in 2011, and was awarded the 2014 Missouri Music Teachers Association Composition Commission in 2013. She will be in Hong Kong this April for the Intimacy of Creativity, held at the Hong Kong University of Science and Technology, as both a Composer Fellow and a performer.

Spearheaded by Chinese-American composer Bright Sheng, the IC is in its fifth year running, successfully bringing together internationally acclaimed performers and young composers for creative dialogue and music-making. Composer-performer collaboration is an art that Sheng claims, was prominent as far back as the 18th century but in disuse in the modern day. The project culminates to two public concerts on April 26 and May 3, where the Composer Fellows will showcase their revitalized works at the Hong Kong City Hall.

How do you feel about being selected to be a Composer Fellow this year?

This year I will participate the program not only as a composer, but also as a performer, which is a surprise and an honor for me. I will play my own work, and more interestingly, I will have the chance to play the work from another fellow composer, On The Road by Clint Needham. It will be an invaluable experience for me to work closely with not only such a talented composer of my generation, but also with other great performers. I am also sure the competent guidance of the IC mentors will help us to grow up on a professional level. Definitely looking forward to this event.

When did you realize you wanted to become a composer?

There is no an exact time where I could say I realized that I wanted my career in music. It was just a process begun when I started to study music at the age of 4. It just felt natural. When I got into the Elementary School of Central Conservatory of Music to study piano at age 10, my father, who is also a composer, asked me if I wanted to play my own music instead of playing somebody else’s work. I thought if I could play my own work, nobody would know that I played the wrong notes or wrong rhythms. So, I gladly took his suggestion, and started to learn composition.

During the IC, you will be expected to make a lot of changes to your music. Are you prepared for it?

I receive critique pretty often, and honestly, I really value these comments. At school, we had group meeting every two weeks, and we could openly comment and discuss the works of each other. I learned so much from my classmates and from the professor during those meetings, and it was also very important for me to better understand my “forte”. So, I am ready to make the changes during the IC.

Can you tell us more about your piece Returning Home? When did you write it and for whom?

I completed this piece in 2014, and it was written for Dr. Alvin Wong, a Hong Kong cellist and also a guest artist for IC 2014. Alvin came to UMKC to give a recital and my professor Dr. Chen Yi told me he was looking for some new pieces, especially something enriched by Chinese elements, to play.

During my researches for the inspiration, I found an old Chinese Qin music that fitted this idea pretty well. Alvin is a very professional and talented musician. I know his ability to play all kinds of techniques, so I decided to utilize some difficult Qin musical ideas in this piece.

What is the inspiration of the piece?

Returning Home is inspired by a famous Qin music called Homecoming (归去来辞). I like guqin music. Even though it has a narrower range than the piano, it can convey totally opposite atmospheres by applying different techniques. It can sound very mysterious, peaceful and beautiful, but it can also sound determined and aggressive.

I chose this traditional guqin work as the root of this piece because in a certain way it mirrors my personal life experience. Even though I am now used to living by myself since moving to the US in 2010, sometimes I still feel homesick. The cello, such a lyrical instrument, is characterized by its melancholic and soulful sound. I find it perfectly confides the nostalgic emotion deep inside me.