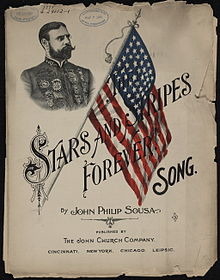 The strong public nationalism in America is often a puzzle to visitors – the national flags hanging on people’s houses, the T-shirts that declare one’s love for country, etc. are highly unusual elsewhere. At most, you might have things in the national colours (red for China, orange for The Netherlands, maroon and white for Qatar, etc.) but few people wear their flag as strongly as the Americans. The strong public nationalism also comes out in American music: it often makes a trumpeting statement that few other countries match.

Many different kinds of music, such as songs, organ music, variation sets, and marches, bring out this nationalist spirit. Here’s a sample of music beginning in the late 19th century that can give you an idea of how bombastic things can get.

Variations on America by Charles Ives (1891). A grandiose statement for organ, the variation sets on the melody include both solemn straightforward versions, skipping rhythmic variations, and crashing major/minor juxtapositions. By the time you’re at the end of the piece, you’ve had to rethink the very essence of the music.

Ives: Variations on America (Michael-Christfried Winkler, organ)
The Stars and Stripes Forever by John Philip Sousa (1897). Considered the greatest march written by Sousa, this work was named the National March of the United States in 1987. For many Americans, this song is redolent of Independence Day band concerts.

Sousa: The Stars and Stripes Forever. (Razumovsky Symphony Orchestra; Keith Brion, Conductor
God Bless America by Irving Berlin (1918/1938). A prayer in the form of a song, this was originally written while Berlin was serving in the US Army in WWI. Unused at the time of writing (1918), he revised it in 1938 as a distinctly American statement against the rise of Hitler in Germany. Given its first performance on Armistice Day 1938, the song continues to stand as a particularly American statement of the country in God’s hands. It has since found a place in music played at American sports games. The most famous version was made by singer Kate Smith and includes the now rarely-played first verse.

The folk composer Woody Guthrie was so annoyed at what he viewed as the complacency in Berlin’s piece that in 1940, he wrote his own paean to America: “This Land is Your Land” (1940). Guthrie’s original title was “God Blessed America” but later changed it to “This Land” when he changed that line in the chorus.

Over time, the leftist political messages in Guthrie’s original have been left-off or forgotten and the song has come around again to be a statement of ownership of the glories of the American countryside. 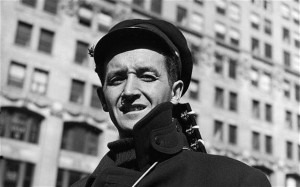 American Salute by Morton Gould (1942). Variations on “When Johnny Comes Marching Home,” a famous song from the American Civil War period. Rather than making a standard set of variations, Gould opens with a sharp biting attack in the brass and percussion, with even the first statement not being of the theme but of a variation on the theme. It’s not until the low winds enter with the theme that we know what’s going on.

Gould: American Salute (United States Army Field Band)
There are many more songs and pieces that would fall into this extreme Americanism camp and they are interesting to look at as much for the ways that they engage your attention as for the musical worlds they explore.